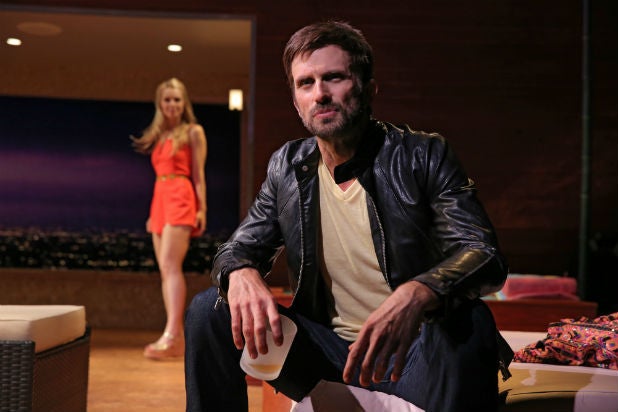 Why has there never been a “Will & Grace” sitcom featuring a straight guy and a lesbian? It’s doubtful this question has ever been asked, but Neil LaBute answers it in his new play, “The Money Shot,” which opened Monday at the Lucille Lortel Theatre under the auspices of MCC.

In LaBute’s spar-com, the fighting between the lesbian Bev (Callie Thorne) and the hetero dude Steve (Fred Weller) begins the moment the curtain goes up and continues for the next 100 minutes.  For anyone familiar with this playwright-director’s work, it will come as no surprise that a very good-looking, buff guy will be outmatched by the lesbian on stage. Is this pro-gay? Probably not, it’s just LaBute once again sticking it to the self-absorbed hunk, because as LaBute keeps telling us: Beautiful people are shallow.

Under the direction of Terry Kinney, Thorne and Weller are pitch-perfect in their look and delivery. She’s all righteous intelligence to the point of calling out his error in mixing up the words “affect” and “effect,” which is a mistake that pales compared to his thinking that David Crosby is Bing’s son or that Belgium isn’t in Europe because it belongs to the EU. Steve’s verbal bungles don’t always develop into great jokes, but Weller is so steadfast in his assurance that he makes most of them very funny. In return, Thorne’s slow-boil explosions turn the theater into an echo chamber of laughter.

Of course, Weller’s Steve isn’t just dumb and good looking. He’s also an egomaniacal movie star with great skin, at age 48, because he “uses a 70 sunblock in the house.”

I never thought I’d write the following sentence. But here’s a play that might work better as a two-hander. (What theatergoer really looks forward to just two actors on stage, or worse, a solo show?) “The Money Shot” might be the first play of the 21st Century to have too many characters. Or too many intellectually dim characters. There’s not only Steve, there’s also his blonde actress-to-be wife, Missy (Gia Crovatin), who is starving herself because “she’s 24 and women have to watch it around that age.”

Bev’s partner, Karen (Elizabeth Reaser), is not a vast improvement as love interests go.  While her movie-acting career took a slight hit when she came out of the closet, she’s rebounded nicely by turning herself into a branding machine with her website, Malibu restaurant, fashion line, recipes, charities, etc. Some of this banter is amusing and some of it provokes laughs simply because nothing is easier, or lazier for a writer, than getting a theater full of New Yorkers to laugh at Los Angeles. Says Steve, “There’s a lot of history in this town, not like New York or London.” Replies Karen, “It goes back literally dozens of years.”