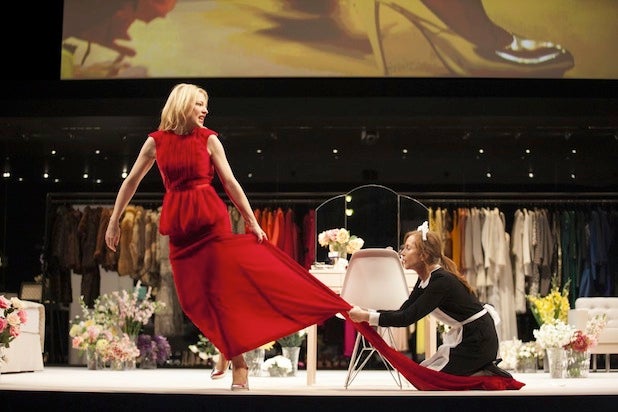 At long last, women have taken back the world of camp from the drag queens. And Cate Blanchett is just the actress to lead the charge.

The Sydney Theatre Company’s production of “The Maids” opened Friday at New York City Center as part of the Lincoln Center Festival. Under the direction of Benedict Andrews, it’s a very broad, gussied up staging of Jean Genet’s 1947 play about two maids, Claire and Solange (Blanchett and Isabelle Huppert ), who impersonate and then attempt to murder their mistress (Elizabeth Debicki). Genet wrote the play for three male actors, and that’s the way “The Maids” has generally been staged in recent years. So it’s almost revolutionary for Andrews to go back to this more “conservative” approach used in the play’s initial stagings around the world.

Less entertaining and more distracting is Andrews’s decision to put his actors in Alice Babidge’s stunning glass box of a set, through which we see video operators taping the women’s actions, which in turn are projected on to a big screen on the back wall of the stage. OK, they’re actors. We get it. The device does have one pleasure: The cameras allows the audience to follow the actresses when they go into the offstage loo, turning even the most private moments into public displays. And let it be said, when a distraught Blanchett looks into the bath room mirror to reapply her makeup, nobody smears lipstick with the panache of Blanchett. That’s also true of the stylish way she removes her hair extensions, sprays Chanel No. 5 between her legs, and doesn’t take off her stiletto heels when she dives into a floor-length gown designed by Alexander McQueen. (McQueen, along with a few f- and c-words, comes courtesy of the the new translation by Andrews and Andrew Upton.)

The original Margo Channing, Norma Desmond, and Neelie O’Hara were played, respectively, by Bette Davis, Gloria Swanson, and Patty Duke — and you’re reminded of these performances as you watch Blanchett onstage. When great actresses go nuts, no man in a dress can top them.

Inspired is the casting of Blanchett-lookalike Debicki as the mistress. She is the overly polished “blue” Jasmine before her husband lost all his money, went to jail, and committed suicide. Like all great actresses, Blanchett already has her imitator, and it’s nice to report that Debicki beat the drag queens to the job.

Then there’s Huppert. She mugs outrageously, and since she’s a good head shorter than Blanchett and Debicki, her jumping around the stage like the mistress’s pet Chihuahua never fails to draw laughs. Maybe it’s part of Andrews’s alienation technique, like the video cameras and screen, but Huppert can’t speak English. Over half her dialogue is unintelligible, as if she were delivering her lines phonetically. But as any aficionado of camp knows, there’s nothing as compelling as a misguided performance delivered with true gusto.