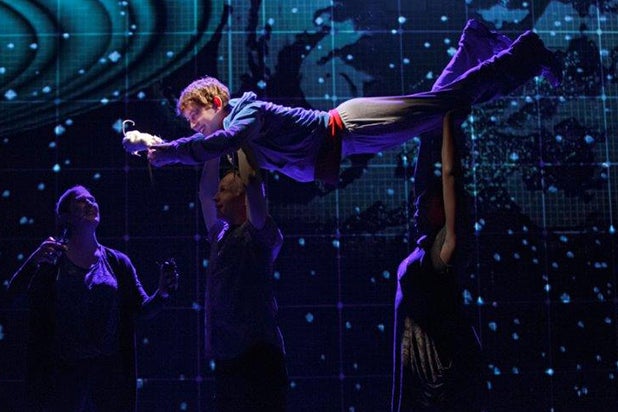 Simon Stephens’ stage adaptation of Mark Haddon’s 2003 best-seller “The Curious Incident of the Dog in the Night-Time” wowed them in London two years ago. Brad Pitt optioned it for the movies, and on Thursday the play finally opened on Broadway at the Ethel Barrymore Theatre.

Let’s begin with what “Curious Incident” is not theater-wise. It is not a big, empty shell of a play like the 2010 British flop-transfer “Enron” or the 2011 British hit-transfer “War Horse,” which was directed by Marianne Elliott, who distracted us from the flimsiness of Nick Stafford’s play by offering up lots of humongous equine puppets.

Elliott is also at the helm of “Curious Incident,” and instead of any stage-worthy puppets, she embellishes Stephens’ play with lots of razzle-dazzle lighting (by Paule Constable) and videos (by Finn Ross) that often turn the high-tech box set (by Bunny Christie) into the overly active kaleidoscope of an autistic boy’s mind. Or maybe the boy has Asperger’s syndrome. We’re never told. But what’s very clear and highly theatrical is that the boy Christopher Boone (Alex Sharp in an impressive Broadway debut) can’t “read” peoples’ faces, loathes human contact as much as he hates the color yellow, is a math genius at age 15, and whenever he becomes excited or upset, the Barrymore stage simply erupts in flashing lights and floating numerals. The technical fireworks are all very impressive, if a light show is what you’re looking for.

Where Elliott’s puppets compensated for Stafford’s paltry play, Elliott’s stage craft detracts from Stephens’ play. It often turns the actors into mere props, and we lose an emotional connection with the boy. Maybe Elliott wants to make the point that these people are as one-dimensional to Christopher as the happy and unhappy faces he keeps drawing on the floor and the walls. This disconnect, however, immediately registers as a problem since much of the first act, unlike the novel, is narrated not by Christopher but his teacher Siobhan, played by Francesca Faridany.

Haddon’s first-person novel awkwardly shoulders the conceit that Christopher, with all of his challenges, has written the book you’re holding. In Stephens’ stage adaptation, Siobhan essentially functions as the narrator, reading the book Christopher has written and given to her; and since we’re hearing only snippets from that book, it’s easier to swallow the conceit that a boy who can’t make sense of puns, similes, and metaphors has actually been capable of writing any of this.

A centerpiece of the novel and the play is the reading of letters written by Christopher’s mother to her son. Again, on stage, Siobhan/Faridany does the honors. Elliott’s staging here is dazzling, but her stage craft completely overwhelms the spoken word as Christopher/Sharp assembles his elaborate toy train complete with tiny dolls, trees, and enough miniature buildings to stage the Lilliputian scene from “Gulliver’s Travels.” Elliott hammers her point into the floor boards: The discovery of the letters has prompted Christopher to make his own escape to London via train. But does anyone hear what’s being said? Certainly, this Christopher isn’t listening — or anyone seated in the Barrymore Theatre, for that matter. It’s a real choo-choo de teatre, and sure enough that little train soon makes its way across the stage as thunderous applause greets an adorable effect more suitable to a brassy musical comedy. One can only pity the director of the upcoming “On the Twentieth Century” who will now have to think up another cute showstopper for that revival.

Intriguingly, the two most memorable moments in “Curious Incident” involve minimal lighting. In one scene, a spotlight showers down on a silent Christopher, wrestling with his demons in bed, while his parents argue in the shadows. In another, his mother’s flashlight is the only illumination as she plans her escape from an abusive boyfriend.

Sharp, Barford, and Graham give nuanced, sensitive performances, and each of their characters, despite coming from radically different places, wins our sympathy. Elliott can take credit for that, but as with “War Horse,” she tends to turn her minor characters into gross caricatures.

Elliot and Sharp’s approach is to present a more benign Christopher than what Haddon gives us in the novel. That interpretation makes his parents’ frustration a little less palpable, but it does give this immensely challenged and gifted character a place to go in the second act. The arc of Haddon’s character is something of a flat line, whereas Christopher on stage develops an edge of maturity as he goes on a journey in search of his mother. He not only learns some hard truths, he and his parents achieve some small degree of intimacy for the first time.