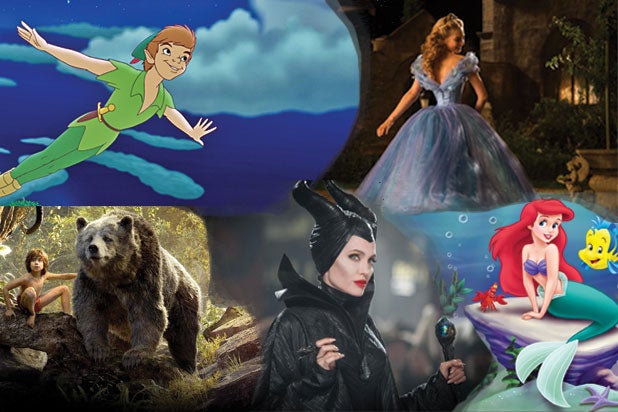 Cogsworth the clock, an uppity little guy in the 1991 Walt Disney animated classic “Beauty and the Beast,” tells a joke during a tour of the Beast’s opulent and abandoned castle: “If it’s not Baroque, don’t fix it.”

That expression could easily be the mantra at Walt Disney Studios, which is developing a staggering 14 live-action films based on animated properties from its storied vaults.

The titles include “The Lion King,” “Peter Pan,” “The Little Mermaid,” “Mulan,” a take on “101 Dalmatians” called “Cruella,” “Dumbo” and “Snow White,” which was just announced this week with prolific producer Marc Platt.

Projects less recognizable to Disney fans — but could still potentially be gold mines — include a new take on Oliver Twist, a live version of Roald Dahl’s “James and the Giant Peach” and a standalone film about Snow White’s unheard-of sister, Rose Red.

For a global conglomerate that has spent close to a reported $15 billion in cash and stock over the past 10 years for content engines Pixar, Marvel Studios and Lucasfilm — the studio is storming back through its own magic mirror to maintain (or, likely, exceed) its near record-breaking market share.

“Disney is particularly adept at identifying the best properties within their sizable vault to update, re-tool, re-boot,” noted Paul Dergarabedian, a senior analyst at comScore.

Indeed, the idea that Disney would rework its own IP isn’t a new one — take the 2010 global hit “Alice in Wonderland” from director Burton and star Johnny Depp that grossed over $1 billion worldwide and has served as a template for the studio’s strategy. (Last May’s sequel, “Alice Through the Looking Glass,” sputtered out with less than $300 million worldwide.)

But hits like 2014’s “Maleficent” (over $240 million domestic) and 2015’s “Cinderella” ($201 million domestic) showed an appetite for live-action revivals of familiar fairy-tale stories, particularly for a company that three years ago seemed to be scaling back on original productions from the Walt Disney Studios in favor of its prized acquisition labels like Marvel and Pixar.

Six of the 14 projects were announced or saw significant talent attached in the past 10 weeks, including Ritchie to “Aladdin” and “Snow White” from producer Platt, his fifth such live-action project set up at the studio.

You could blame the crush on a hit as recent as April’s live-action “The Jungle Book,” a film from Favreau that exceeded its opening expectations by $30 million to claim $103 million total at the domestic box office that first weekend. It is achingly close to cross $1 billion worldwide.

Reviews were also strong for a project that left many wondering how talking animals might translate outside the animated world (for more on that occasionally terrifying translation, here’s a refresher on The Uncanny Valley).

Dergarabedian cautioned Disney not to lean entirely on the recognition built in for these titles — they have to make quality movies no matter what.

“Using familiar IP cannot be used as a panacea for the industry and is no guarantee for box office success,” he concluded. “Familiarity … will only get you so far, and the perceived quality of the actual movie has to take the baton.”

There are also recent examples of the model failing. “Alice Through the Looking Glass,” was a huge bomb, grossing a mere $77 million domestically on a $170 million budget. And August’s reboot of the ’70s live action-animation hybrid “Pete’s Dragon” did not live up to Disney-sized expectations, fetching roughly $75 million in North America on a $65 million budget.

The next live-action adaptation to hit theaters is “Beauty and the Beast,” out March 17, 2017. Twelve of the 14 films have no dates, but we’re talking years into the future  — especially for the projects that share a director in Favreau or producer in Platt.

You’ll probably see that Cogsworth joke again, but the talking timepiece will be three-dimensional and voiced by Ian McKellan. Perhaps he’ll give a similar tour to Emma Watson as Belle, who will contend with the grumpy and equally real-life Beast in Dan Stevens.

If it ain’t Baroque.