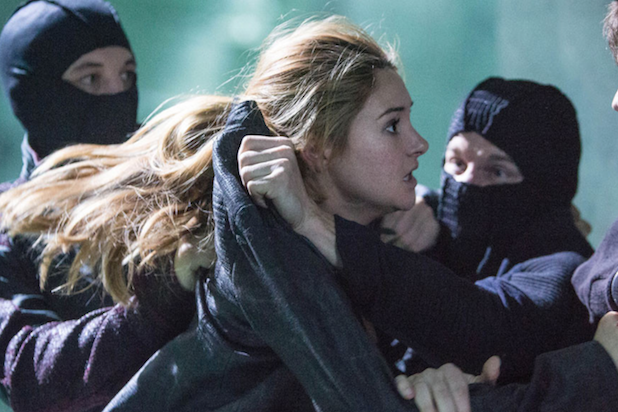 Even in manuscript form, Red Wagon Entertainment heads Doug Wick and Lucy Fisher could envision the film they wanted to make from “Divergent.”

The story of a young girl struggling to survive in a dystopian future was the brainchild of Veronica Roth, then an undergraduate student at Northwestern University, and had yet to go on to inspire a best-selling series of novels. Yet even on the page it was cinematic.

Plus, it boasted all the elements that characterized previous big screen efforts from the producers, a list of credits that includes “Gladiator,” “Memoirs of a Geisha” and “Working Girl.” Namely, “Divergent” offer up a sharply defined world, a love story and the tale of a hero who overcomes enormous obstacles. In a film universe dominated by men with guns and capes, it also boasted an assertive female heroine.

“I read the book and thought, who is this new philosopher,” Wick told TheWrap. “She was only an undergraduate, but she was so wise about life and death and parenting and first love.”

Readers agreed with Wick, pushing Roth’s trilogy up the best-seller list and helping it sell more than 16 million books since the first novel hit in 2011. The books unfold in a grim future where people are divided into various factions based on their personality traits. Tris, the hero of the story, discovers she does not fit into any of these groups, while also uncovering a massive conspiracy.

“It touched some giant nerve,” Fisher said. “It’s all about figuring out what you’re willing to sacrifice to be yourself and that struck a cord with readers of a certain age.”

A film version debuts in theaters on Friday, carrying with it the hopes of producer Lionsgate that it can spawn a series of young-adult blockbusters to rival “The Hunger Games” and “Twilight.” It is projected to open to roughly $55 million this weekend, a strong start for a picture without major stars or comic book heroes.

“It won’t match the original ‘Twilight,’ but that’s still a big number,” Jeff Bock, a box office analyst with Exhibitor Relations, said. “That’s impressive for March and for a studio that’s trying to start a new trilogy in a landscape that has seen nearly every studio try and fail to launch a young adult hit.”

A graveyard exists for previous successors to “The Hunger Games” and “Twilight,” one flecked with markers for such franchises that weren’t as “The Mortal Instruments” and “Beautiful Creatures.” “Divergent” seems likely to avoid that tomb thanks to its larger fan base, but having a passionate readership carries its own risks.

“You treat the audience as a partner because they know so much and they care so much,” Fisher said. “When ever we considered making a change from the book, which we didn’t do frequently, we shared that with the fans and with Veronica.”

For instance, Fisher said that the filmmakers were encouraged to move forward with a different ending that sees Kate Winslet, who plays the film’s main antagonist, play a crucial role in the finale after receiving Roth’s blessing. It was a deviation from the book that they believed was justified because of the Oscar-winner’s prominence.

Finding the right actress to play Tris ended up being painless, with the role going to up-and-comer Shailene Woodley. Though her performance as the rebellious daughter in “The Descendants” earned plaudits and Fisher and Wick’s attention, it didn’t instantly signal she could throw a punch. That changed with their first meeting.

“We thought we were going to have this really fun experience where we’d meet every single talented young actress that spoke english and we cast literally the first person we met for the role,” Fisher said. “We admired her skills as an actress, but she seemed so frail and skinny and timid, but then she told us about how on the weekend she liked being kidnapped and blindfolded as some kind of urban survivalist, live by your wits thing. She had this inner warrior and she did these things out of her own sense of fun.”

“She is on the verge of her own kind of stardom ,” Wick predicted. “She brings a complete emotional reality. She’s headed for stardom, but it will be on Shailene’s terms.”

Beyond launching one of the most anticipated movies of the spring, Wick and Fisher are distinct in another, important way. They are one of the rare married couples in Hollywood who work together.

It was an association that grew out of Wick’s work on 1999’s “Stuart Little,” which went into production at Columbia Pictures while Fisher was vice-chairman of the studio. Fisher said that she had traditionally excused herself from discussion related to any project Wick was involved with at the studio, but because “Stuart Little” was seen as crucial to Columbia’s Christmas slate, she was eventually convinced to participated in creative meetings. The couple found they fed off each other’s ideas and Red Wagon was soon expanded to include Fisher.

“As a young producer, it would have been an unthinkable idea for me,” Wick said of his decision to partner with his wife. “But over time, I became more interested in finding the right partnerships to make movies better. When we’d have those discussions on ‘Stuart Little,’ every time she was the smartest person in the room, and each point she brought up made everything better.”