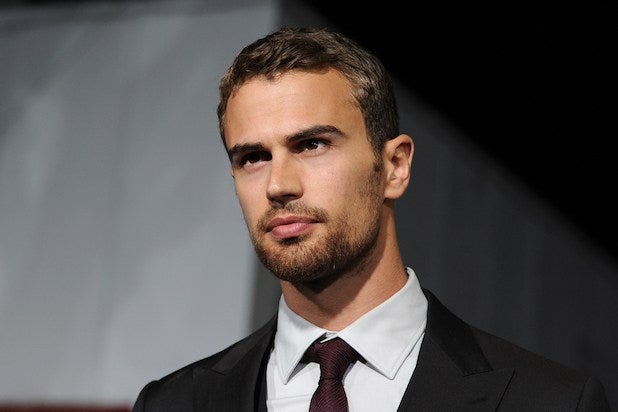 “Divergent” star Theo James may be hooking up with Shailene Woodley in Lionsgate’s latest YA novel adaptation, but he agreed that the movie about outsiders secretly living in a five-faction society could be interpreted as a gay allegory.

“Yeah. That’s an interesting parallel to make,” James told the Advocate when a reporter proposed that the PG-13 thriller could be interpreted as a metaphor for the acceptance of bisexuality.

“I hadn’t connected those dots myself, but there’s definitely truth in there,” James said.

“Divergent,” based on author Veronica Roth‘s novel of the same name, follows a 16-year-old (Woodley) as she prepares to enter one of five factions — Abnegation (selflessness), Amity (peacefulness), Candor (honesty), Dauntless (courage), and Erudite (intelligence) — only to discover her personality doesn’t fit any of them in particular, and she is actually a member of an endangered social class of futuristic citizens called Divergents.

“‘Divergent’ is a story about people who don’t fit into a category, that is a big part of the message, but it’s also about conformity and forcing people into these simple archetypes,” James said. “At the end of the day humans don’t exist like that. We’re multifaceted.”

The 29-year-old actor from Oxford, England emphasized that the film does not offer “direct commentary on a specific political issue,” but he does hope it advances one, in particular.

“Part of what drew me to Four was his concept of masculinity, specifically in how he relates to Tris and their relationship. He’s intrigued by her but respectful of her bravery and her personality traits. He’s constantly trying to push her to be as strong as possible. Through that, she is respectful of him and thus they start to respect each other. So it’s a mutual relationship rather than one based on her fawning for a man,” James said. “Her being strong doesn’t de-masculate him, and hopefully that’s pushing a more positive message about gender equality.”

James noted that the popularity of “The Hunger Games” franchise, led by Jennifer Lawrence as heroine Katniss Everdeen, suggests a public hunger for more female action heroes. He’s still not sure, however, if there is enough support from audiences or studios for a blockbuster gay action hero, but hopes there will be, eventually.

“It’s very hard to tell, because today there are great shows like ‘Looking,’ poignant pieces of work that revolve around a central cast of characters that happen to be gay,” James said. “But I remember when ‘Queer as Folk’ came out and thinking, ‘Things are changing. Maybe there will be more [shows like this].’ And then suddenly there was a drought. Hopefully the day isn’t far away.”