Jon M. Chu’s adaptation of Lin-Manuel Miranda’s Tony-winning musical “In the Heights” is finally here in theaters and on HBO Max, and it’s a massive hit with critics. The reviews gave the latest Warner Bros. musical a 97% score on Rotten Tomatoes, with many declaring it the first real contender in the 2022 Oscar race. 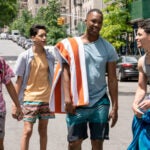 Also Read:
How Lin-Manuel Miranda’s ‘In the Heights’ Went From College Project to Major Motion Picture

Well, the post-credits pays that scene off because Mr. Softee’s truck breaks down and all the children rush back to the Piraguero’s truck. Business is so good for Piraguero that he even jacks up his piragua prices from $1.25 to $2.25, all to the frustration of the Mr. Softee truck driver.

Called the “Piragua (Reprise),” you can check out the lyrics below.

In her review of the film, TheWrap’s Monica Castillo wrote that in Broadway history, there have been only a handful of musicals that center on U.S. Latinos, and only a fraction of those shows were written by people from the communities they were portraying on stage. That’s part of the reason why Lin-Manuel Miranda’s “In the Heights” made waves when it opened on Broadway back in 2008 (after a successful Off-Broadway run). More than a decade later, and after a bit of a delay due to the pandemic, Jon M. Chu’s cinematic adaptation of Miranda’s first musical promises to make an even bigger splash with its celebration of family, love, and the idea of home.

Analysts and rival distribution execs have pointed to “In the Heights” as having a great formula for a post-COVID summer title. Its vibrant depiction of Latino immigrant culture, combined with actors and filmmakers of color in the credits, is expected to bring in a diverse array of moviegoers while its upbeat vibe and bright musical numbers promise a respite from the misery of the pandemic — everybody loves singing and dancing on the big screen. A poll of 1,300 moviegoers by Fandango revealed that 96% plan to make “In The Heights” their first trip to theaters since the COVID-19 shutdown.