WARNING: Spoilers ahead for “The Lost City”

“The Lost City,” now in theaters and soon to be streaming on Paramount+, may be based on a fictional romance novel but, like any good adventure, it leaves room for a sequel.

In fact, as the film suggests, the story of Loretta Sage (Sandra Bullock) and Alan (Channing Tatum) could be the beginning of a brand new franchise. Together they end up on a massive treasure hunt — albeit somewhat begrudgingly in Bullock’s character’s case — across the world. It’s filled with romance, comedy, and of course, a semi-twist ending.

But we won’t spoil that part. If you’re here, you’ve been on that hunt, and you want to know if there are any post-credit treasures after the fact. 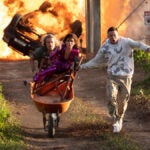 The answer is yes, there is a post-credits scene in “The Lost City.” Well, technically it’s a mid-credits sting. But there is one final piece of the story — and it’s a pretty good laugh.

Toward the start of the movie, we meet Brad Pitt as Jack Trainer. He’s a trainer whose last name is also Trainer. But he’s also a former military man, so when Alan and Beth (Da’Vine Joy Randolph) can’t get actual law enforcement to help them track down Loretta, they call him in.

Jack is just about every action hero trope you can think of, and he promises to have Loretta back within a day or two. And indeed, he does manage to save her, with Alan fumbling along at his side. Unfortunately, Jack is abruptly killed shortly thereafter. His actual brains may not have splattered onto Alan, but a whole lot of his blood sure did. 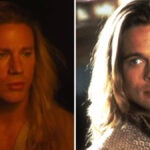 But, rest assured, Brad Pitt doesn’t truly die in “The Lost City.” The mid-credits scene finds Loretta and Alan together at a meditation retreat after their adventure, much like the one where Alan met Jack Trainer. As they find their calm, we see Jack is actually alive and well, sitting just behind them.

He gets their attention, scaring the life out of Alan in the process. Obviously they want to know how Jack survived, to which he responds that he basically willed himself to. Jack references the myth that humans only use 10% of their brains, and says that, when he was shot, he simply started using some of that remaining percentage.

And so, Jack Trainer will live to see another day. Maybe even a sequel, should “The Lost City” get one.