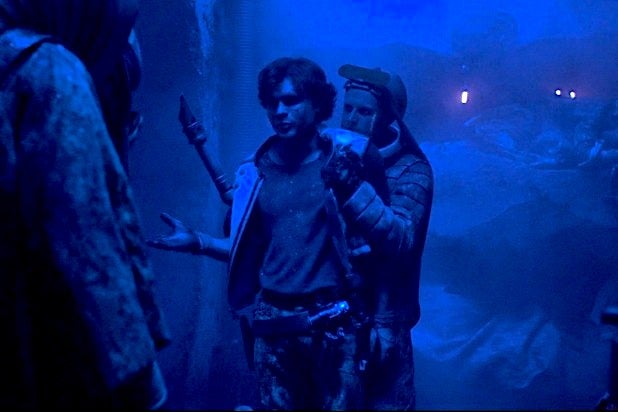 (Some spoilers for the very beginning of “Solo: A Star Wars Story” ahead)

It’s tough to guess how much of the finished version of “Solo: A Star Wars Story” was shot by directors Phil Lord and Chris Miller before they got the boot in the summer of 2017, and how much was shot by their replacement, Ron Howard. Some reports say that Howard, who came in before they had finished shooting, re-shot 70 percent of what Lord and Miller had already done. But given that they were filming for nearly four months before Howard, it’s conceivable that the resulting film is entirely his.

Those of us who weren’t involved in production will likely never have a solid answer. But with that in mind, there’s one deleted scene that was included on the home video release for “Solo” — it’s out on digital now, and physical media hits on Sept. 25 — that may give us a clue about how different Lord and Miller’s version might have been.

The reason that the scene in question set off alarm bells when we watched it is that not only does it not fit anywhere in the narrative of the finished movie, but it actually appears to be an alternate version of the scene on Corellia at the beginning of the movie where Han Solo (Alden Ehrenreich) tells Qi’ra (Emilia Clarke) that it’s time to bail on their life of servitude to Lady Proxima and get off planet.

Also Read: Yes, That Was THAT Dead Villain in 'Solo: A Star Wars Story' - Here's What it Means

But it’s not just a differently shot version of the same scene. It’s an entirely different scene, setting the events of the film in motion in a way that might indicate that a key component of the film was completely absent from Lord and Miller’s version of the movie.

So in the finished version of “Solo,” it begins with Han telling Qi’ra that he stole some coaxium that they can sell to get out, but Proxima’s people grab him before they can actually even start running. Then Han is taken in front of Proxima, who has a large crowd of people gathered in her chamber.

The deleted scene presents these events very differently. Han tells Qi’ra that they need to run because some job he did for “mother” went badly and they need to get out before Proxima punishes him for it — it sounds like he thinks she’ll kill him. It’s extremely notable that the coaxium is not a part of this version of the scene. We can’t help but wonder if maybe “Solo” at some point during production didn’t feature coaxium at all.

Like in the finished version, Proxima’s people corner Han before they can do anything. At the very end of the deleted scene we go again to Proxima’s den, but this time there is no crowd of people there, just some guys playing with what looks like Proxima’s children in the water. And then it cuts.

There’s a few possible explanations for the differences here. The first is that an earlier version of the movie emphasized how bad life under Lady Proxima was for Han and Qi’ra by having them go through this scenario multiple times. Han’s outfit could be explained by the fact that he’s poor and only has that one set of clothes.

Second, this deleted scene could be Lord and Miller’s version of the opening bit. Which would be extremely interesting, given the absence of the coaxium. Could all the stuff in “Solo” about coaxium have been added in Ron Howard’s reshoots? That would be a huge change that would explain a lot of things, but we’ll come back to that possibility in a moment.

The third possibility is that this deleted scene is actually Ron Howard’s version and they kept the Lord and Miller version of the scene in the movie.

Lastly, it is conceivable, if not likely given how much they had to do, that Howard shot both the finished scene and this deleted scene.

My guess, as the headline on this story suggests, that this deleted scene belonged to Lord and Miller. It is just a guess, though — all of this amounts to little more than an academic exercise without any further evidence. And we likely will never have any evidence one way or another on this.

But since this deleted scene doesn’t include the coaxium that is so integral to the plot in the finished movie, there are a ton of ramifications to the idea that it was completely absent from Lord and Miller’s version. It could also explain why filming under Howard took longer than was planned — when he was brought on board, the idea was he would do the last four weeks of principal photography as well as an extra five weeks of reshoots. But they ended up shooting for 14 more weeks, not nine. So if they had to rework the entire plot to incorporate coaxium, that would take some significant effort.

This is, again, all guesswork, so take it with a grain of salt. Whatever the answer, it’s fascinating that Disney would included a deleted scene with the home video release of “Solo” that could send us down this rabbit hole. .