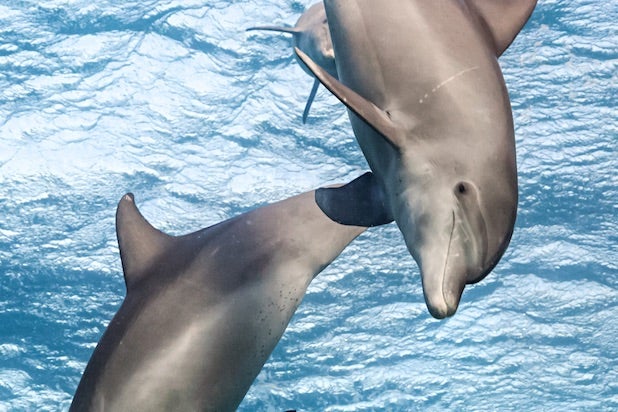 Of the two Disneynature nature documentaries that arrive on Disney + on April 3, “Dolphin Reef” is the shorter and breezier of the two, and the one that doesn’t carry the news value of having Meghan Markle as a narrator, the way “Elephant” does. The film has also followed a meandering path to its release, coming out two years ago in France under the title “Blue” and changing its narrator from Cecile de France (for the French version) to Owen Wilson to Natalie Portman along the way.

And yet despite the delays and detours, “Dolphin Reef” is a satisfying entry in the Disneynature slate, albeit one where the dolphins in the title are upstaged by some of their supporting cast, and the reef itself is even more spectacular than the creatures who get the most screen time.

Think of it, maybe, as the “Goodfellas” of nature docs, with the peacock mantis shrimp stealing the show the way Joe Pesci did in that movie; or as one of those Tim Burton movies where the production design is more interesting than the dialogue.

Our ostensible heroes are “Echo,” a three-year-old bottlenose dolphin who is, we are told, playful and headstrong and not ready to leave his mother and fend for himself; and “Kuma,” his long-suffering mom who wants junior to grow up before he gets eaten by orcas or something. As usual for Disneynature offerings, naming the animals and giving them human motivations via the narration can be problematic for all but the kids in the audience; I find it annoying, but your mileage may vary.

The central story of director Keith Scholey’s movie is Echo’s coming of age, though it’s clear that particular narrative was probably constructed in the editing room more than actually playing out on this Polynesian coral reef. The “original story by Keith Scholey” credit suggests this is one of those Disneynature films that concocts a plausible and family-friendly narrative as a way to explore animal behavior and explain it to a young audience.

But the Echo story makes for a functional way to explore the reef, with its staggering beauty and wild variety of life. “Dolphin Reef” is at its most fascinating when it introduces us to the dolphins’ neighbors, including the aforementioned peacock mantis shrimp, who look as if they were formed by an explosion in the arts-and-crafts drawer of a preschool classroom; humphead parrotfish, who eat coral and poop sand; broadclub cuttlefish, with mouths that look like octopi stuck to the front of their heads; spiky and predatory lionfish; tiger sharks, who eat other sharks; humpback whales, with apparently elaborate rituals designed to secure foster fathers; and turtles – who, Portman tells us, “hate to wait in line.”

Also Read: 5 Things Producers Should Do When They Can't Produce | PRO Insight

The delight in “Dolphin Reef” lies in the intricate dance of these creatures in a setting of otherworldly drama, and Scholey and co-director Alastair Fothergill are nature-doc vets who know how to get the footage. The oceans have been the setting for some of the most visually impressive nature filmmaking you’ll ever see, and this film adds a string of indelible images, from the opening shot of body-surfing dolphins, to a dramatic shark feeding frenzy in the dead of night, to close-ups of seemingly every tiny creature on the reef, to an ineffably graceful shot of the dolphins swimming in their sleep.

Portman’s narration is perky and casual; she’s here to play along more than to instruct. When she offhandedly mentions a couple of times that the reef is dying, you may want to hear why and what can be done – but Disneynature and the filmmakers behind “Dolphin Reef” would rather lure a young audience in by showing them how cute Echo and his pals are. They can leave the warnings and prescriptions for another time and a different movie.