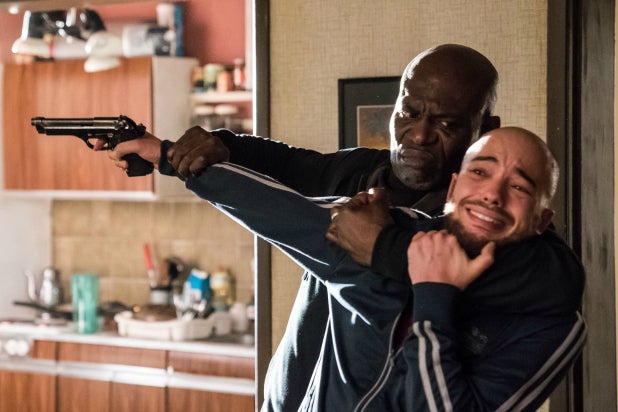 Nikolaj Coster-Waldau is dangling off a rooftop. To his left, he can see his best friend through a window, dying from a slit throat. To his right, he can see the murderer, also hanging for dear life. It’s a hell of a scene, a hell of an image, and yet — we feel nothing.

That’s “Domino,” a couple of interesting set pieces in search of a reason to exist, from director Brian De Palma. For most of his career, De Palma has been hailed as a modern master of suspense, or at least a dynamite visual stylist. And although many of his films — including “Carrie,” “Blow Out” and “Dressed to Kill” — are now classics, even misfires like “Snake Eyes” and “Passion” usually have some bravura cinematic showpieces that make them worth watching.

The best that “Domino” can boast are some general concepts for exciting set pieces. Moments like the film’s early “Vertigo” riff and a climactic attempted terrorist attack at a bullfighting ring (set off via drone) are intriguing on paper. Unfortunately, the rest of the paper is filled with humdrum plotting and characters so flimsy that it’s impossible to care about what happens to them (The screenplay is by Petter Skavlan, “Kon-Tiki”).

Coster-Waldau plays Christian, a Danish police officer whose partner Lars (Søren Malling, “A War”) is also his best friend. One night they’re called to a crime scene, and they arrest a killer, Ezra Tarzai (Eriq Ebouaney, “A Season in France”), as he flees the scene.

The plot thickens when Christian discovers the man Tarzai killed was a member of a terrorist cell with explosives in his apartment, but before Christian can do anything about it, Tarzai escapes, slashes Lars’s throat, and flees into the night, only to get abducted by mysterious American agents.

These agents, led by Joe Martin (Guy Pearce, using a Southern accent that sounds like an insult), want to use Tarzai — an ex-soldier on a personal revenge mission against ISIS — for their own purposes. But Christian and his new partner, Alex (Carice Van Houten, “Black Book”) want to apprehend Tarzai for the whole “killing Lars” thing.

The plot threads never really come together; they just eventually find themselves in the same room: Christian and Alex can barely think of two interesting words to say to each other, the CIA subplot goes nowhere, and Tarzai never really gets to let loose. There’s nothing to grab onto, and even if there was, there’s no reason to hold on.

De Palma doesn’t seem to care very much either. Huge sections of “Domino” roll by in a tedious rhythm until, every once in a while, he finds a groove. Any other filmmaker would probably give little thought to the cinematic skillsets of a terrorist group, but De Palma seems interested in very little else. It’s as though he discovered that evil people put evil videos on the internet, and it made his twisted imagination wander.

“Domino” features a scene of a mass shooting from the perspective of two cameras mounted on the terrorist’s gun — one aimed down the barrel, the other directly at the shooter’s face. Hearing the villains discuss the thematic interpretations of these two opposing angles, and the importance of intercutting between them to better sell their propaganda is perverse. It adds a rare moment of personality to an otherwise bland, low-budget thriller, but when a director gets more excited about making the movie within the movie, you know you’re in trouble.

It’s easy to imagine De Palma making a little more out of “Domino” had he had a bigger budget than an episode of “CSI.” At least, that’s what it looks like he’s got. The cinematography by José Luis Alcaine (“Everybody Knows”) pulls out the stops for a few brief moments — an extended zoom here, an ambitious drone shot there — but the majority of the film is profoundly uninspired. “Domino” looks like it was shot by a second-unit director, with De Palma coming in only for the action sequences.

Those action sequences are good only in contrast with the other scenes in “Domino.” Compared to the rest of De Palma’s oeuvre, or anything else in theaters right now, those set pieces either fall flat or fall flat on their face into a pie. The conclusion to the film’s high-concept finale is an image so laughable that, well, you’re gonna laugh.

The conclusion to “Domino” is uniquely dissatisfying. Weird recurring images, specifically tomatoes (lots and lots and lots of tomatoes) come together in the most asinine way, and the storylines resolve (or, rather, mostly fail to) with a halfhearted shrug. When Guy Pearce leaves this movie, it looks like he’s leaving the set and happy to be done with it. He’s out. He’ll send for his things.

An actual game of dominos has more entertainment value — more depth and panache, too. “Domino” offers a sloppy screenplay with underdeveloped characters and a half-written plot, pumped full of racist, fear-mongering, one-dimensional villainy. Only the most diehard De Palma fans will find anything to intrigue them, and they’re going to have to sift through a lot of boring junk to find it.