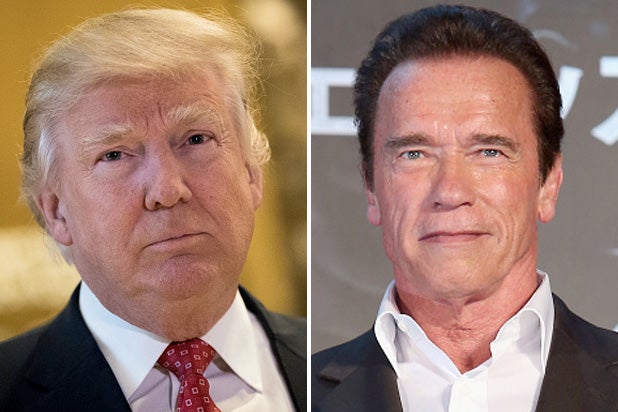 President Donald Trump just can’t quit the ignominious demise of his former reality TV show “Celebrity Apprentice,” taking to Twitter early Saturday to claim that this past season’s host, Arnold Schwarzenegger, “was fired by his bad (pathetic) ratings, not by me.”

Schwarzenegger, who led the 15th season that just wrapped for NBC to disappointing ratings, quickly tweeted a reply: “You should think about hiring a new joke writer and a fact checker.”

On Friday, the big-screen action star and former California governor announced that he “would decline” to return for another season “even if asked,” and blamed the show’s poor showing on Trump — who starred in 14 seasons of the show and retained an executive producer credit even after winning the presidential election.

“With Trump being involved in the show people have a bad taste and don’t want to participate as a spectator or as a sponsor or in any other way support the show,” Schwarzenegger said. “It’s a very divisive period now and I think this show got caught up in all that division.”

NBC has not yet responded to TheWrap’s request for comment.

The post-Trump era of NBC’s job interview competition got off to a disappointing start, with the January premiere scoring a modest 1.3 rating/4 share in the key 18-49 demographic and 4.9 million viewers overall.

NBC has not made a decision on renewing the show but, as TheWrap reported on Thursday, six of its 12 sponsors from Season 15 announced they would not return in response to a lobbying effort called #GrabYourWallet that objected to Trump’s involvement.

None of the companies — including Tyra Beauty, Lorissa’s Kitchen, the Los Angeles Clippers, QVC and Carnival Corporation — explicitly cited Trump as their reason. But campaign organizer Shannon Coulter said, “I think it’s pretty clear at this point that the Trump brand name is toxic.”

As Trump tweeted on Saturday, “Sad end to great show.”

Arnold Schwarzenegger isn't voluntarily leaving the Apprentice, he was fired by his bad (pathetic) ratings, not by me. Sad end to great show

You should think about hiring a new joke writer and a fact checker. https://t.co/SvAjuPdHfa