Late-night host Stephen Colbert torched Donald Trump, Jr. for a joke he made during his Conservative Political Action Conference speech that got no laughs. 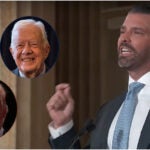 After referring to Trump as the “son of the former president and guy pointing out that cocaine is technically a vegetable,” Colbert rolled the clip of the joke in question.

“Texas has always led the charge. Well, ’til about, like, a couple of months ago and then Austin kind of took over,” Trump declared to the audience gathered in Dallas on Friday. “Like, I don’t know guys, like, Texas was leading the charge. You’re still top 25. We gotta work on that stuff because some people have lost their minds, right?”

Trump wasn’t the only right-wing figure skewered by Colbert. Rep. Marjorie Taylor Greene, a frequent subject in his monologue, was skewered for her anti-vaccination stance. Colbert’s audience now boos on cue whenever Greene’s name is mentioned.