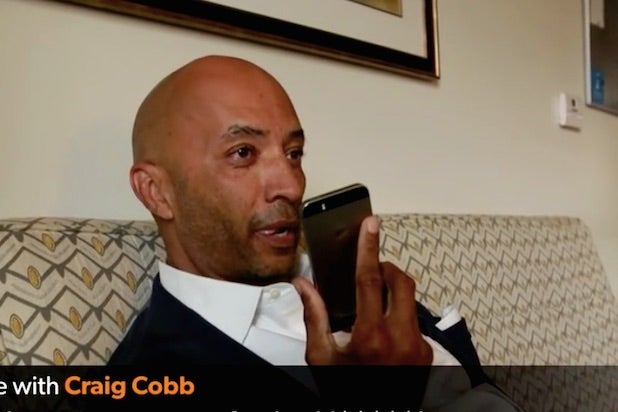 Good journalism often requires reporters to disregard their personal feelings when covering a story, and ABC News anchor Byron Pitts did just that recently when a white supremacist supporter of Donald Trump repeatedly screamed the N-word at him.

“It went from zero to a hundred right away,” he told TheWrap in an interview on Thursday. Pitts, who’s spoken to his fair share of white supremacists, said he wasn’t surprised that noted white nationalist Craig Cobb went off.

“I expected the conversation might get there at some point and I was prepared for that,” he said.

Pitts reached out to Cobb to ask about his efforts to secure property in a North Dakota town for the purposes of making it a white enclave. At first Cobb was polite, professional and charismatic during their conversations, agreeing to sit down for an interview.

But his tone changed quickly after learning he was speaking to an African-American anchor.

To Pitts, displays like Cobb’s only accelerate the decline of racism in America. “Let the Craig Cobb’s of the world exhaust themselves saying what they think; I choose to believe the good and decent people of America will figure out how we can get this right.”

Cobb has gained publicity in recent months for trying to take over the town of Antler, North Dakota and rename after Trump. Pitts doesn’t think Cobb’s racist views should be linked to the GOP frontrunner.

Also Read: Donald Trump Says He's Not Worried Because 'Many, Many Blacks' Support Him (Video)

“Nothing I’ve heard or read from Donald Trump would suggest he’d at all agree with people who hold the views of Craig Cobb,” Pitts said.

But he does think some of the language Trump has used on the campaign trail, which Pitts called “angry speak,” may appeal to a large swath of Americans.

“It is an explosive word. It speaks to one of the ugliest chapters in American history,” Pitts said, explaining that he endures “N” bombs from people like Cobb, who don’t even acknowledge him as a human, because there’s value in confronting the challenges facing our country. “As a journalist, more information is better than less.”

“It’s not my job to judge … I don’t want to be guilty of the same thing that person is guilty of,” he continued. Pitts recounted being “jarred” the first time he was called the N-word as a 12-year-old while playing Pee Wee football in Baltimore. “It’s never jarred me since.”

Also Read: Mike Huckabee Says Racism in America Is a 'Sin Problem... Not a Skin Problem'

Ultimately, when asked what he thinks of Cobb, Pitts deferred to mom.

“As my mother would say, God bless his little heart.”

The Trump campaign has not responded to multiple requests for comment from TheWrap concerning Cobb’s support or his comments toward Pitts.