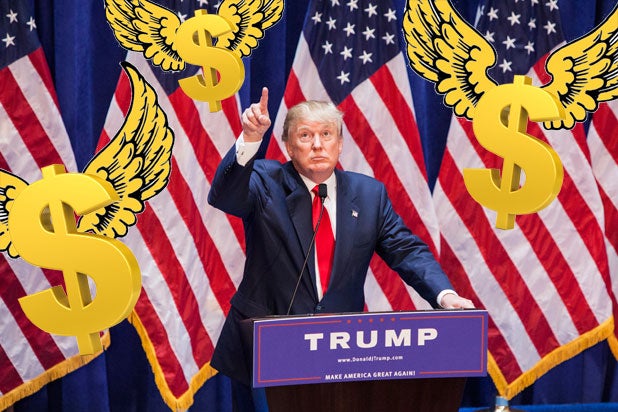 For a man worth a self-reported $8.7 billion dollars, those losses may seem like small potatoes. But this could be just the beginning of the storm, and Trump’s net worth is already overstated by $5.6 billion, according to Forbes. (The difference mostly comes down to the valuation of the Trump brand: Donald puts his name’s net worth at $3.3 billion itself, whereas Forbes finds it to be a far less at $125 million.)

But what does he actually stand to lose? Well, Trump himself places a $14.8 million value on the Miss Universe, Miss USA and Miss Teen USA Pageants, which he co-owns in a joint venture with NBCUniversal. Those will be far less valuable without a network TV home.

While the exact amount that he would receive from the NBC beauty pageant broadcasts is not known, the financial value of the Spanish-language simulcast on Univision is clear.

The $500 million lawsuit Trump filed against the network Tuesday stated that the mogul and the Miss Universe Organization would have received $13.5 million over the next five years, or about $2.7 million annually.

Also Read: Donald Trump Fired by Macy's: 'We Have No Tolerance for Discrimination in Any Form'

There’s even more money at stake in Trump’s nixed “Celebrity Apprentice” deal. In 2011, it was reported that he makes $65 million per year on “Apprentice.” At the time, NBC said his real compensation isn’t even in sniffing range of that number.

“The financial information reported today in regards to ‘The Celebrity Apprentice’ is grossly inaccurate and has been significantly overstated,” a network spokesperson said in 2011. “While it is our policy to keep financial information strictly confidential, neither the production costs of the show nor what Mr. Trump makes personally is in the realm of reality.”

However, NBC may not be privy to the full details of Trump’s “Apprentice” deal, as it would be between the show’s now-former orange-haired host and Mark Burnett‘s production company.

Trump’s own estimate, while massive, may not be far off — even the skeptics at Forbes didn’t really shoot that one down.

In 2011, Forbes stated that Trump already received $60 million annually from his entertainment gigs — and that was before his supposedly big “Celebrity Apprentice” bump. Of course, like much of reality TV, the show was more popular back then than it is currently. Plus, that four-year-old Forbes estimate included other gigs, such as the regular “Apprentice,” the pageants, and Fox News appearances, among others.

Other speculation has placed Trump’s actual compensation from “Celebrity Apprentice” around a far more modest $2 million or so. One person with knowledge of the program told TheWrap that Trump’s actual pay for his involvement was definitely not in the double-digit million dollar range. So how could one deal have so much disparity? That $65 million number, while still likely inflated, may include value assumed from prominent product placement in the show, such as the Trump Tower, his golf courses, and other associated brands.

In 2009, Us Weekly reported that the contestants on “Celebrity Apprentice” made $16,000 apiece — not much in the entertainment world.

While this is admittedly a case of very rough math, for the sake of compromise and given NBC’s heavy balk at the $65 million figure, let’s cut that number in half and put Trump’s “Celebrity Apprentice” fee at approximately $32.5 million.

Trump’s royalties from his licensed Macy’s menswear line came in at $3.2 million between 2005 and 2007. It is reasonable to presume that those figures have held steady, meaning The Donald averages just north of $1 million annually for his participation with the department store. That was until Wednesday.

Totaling it all up, Trump’s estimated loss — so far — is somewhere around $50.5 million. Even for a moneybag like The Donald, that’s a hard number to swallow.