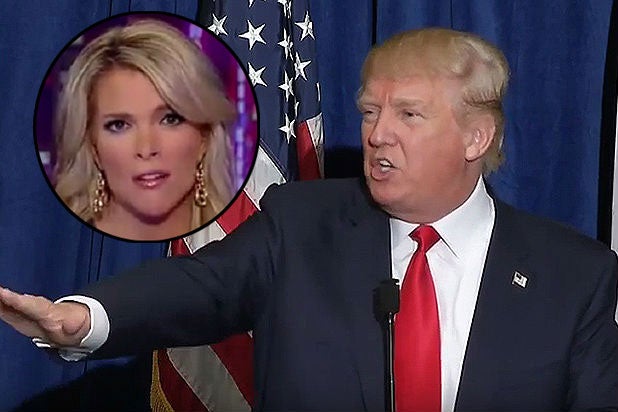 Donald Trump is back to bashing Megyn Kelly.

The GOP presidential candidate used Twitter, what seems to be his favorite method of communication, to criticize the Fox News host for allowing “two really dumb puppets” to assert their opinions that Trump was not the victor of the latest Republican debate that aired on CNN last month.

The guests in question are Chris Stirewalt and Marc Thiessen, who appeared on “The Kelly File” Thursday night.

Stirewalt is the Fox News digital politics editor and Thiessen is a former speechwriter for George W. Bush.

Also Read: Steven Tyler on Donald Trump-'Dream On' Drama: 'Everyone Deserves to Be Able to Pay Their Bills'

According to Trump, he wasn’t a very good one.

Megyn Kelly has two really dumb puppets, Chris Stirewalt & Marc Threaten (a Bushy) who do exactly what she says. All polls say I won debates

Also Read: Donald Trump Has Only Spent $1.9 Million of His Own Money on Presidential Bid

.@marcthiessen is a failed Bush speechwriter whose work was so bad that he has never been able to make a comeback. A third rate talent!

Trumps tweets, and retweets of his supporters’ critical remarks of Kelly, are the latest in expression of a grudge he has held since participating in the year’s first Republican debate that aired in Fox August.

“You think I was asked nice, easy questions?” Trump said after the debate. “I certainly had the worst questions, the most unfair questions.”

“I do not think Megyn Kelly is a quality journalist,” he also said. “I think her questioning of me, despite all of the polls saying I won the debate, was very unfair. Hopefully in the future I will be proven wrong and she will be able to elevate her standards to a level of professionalism that a network such as FOX deserves.”

Trump’s relationship with the cable news network has been rocky ever since.