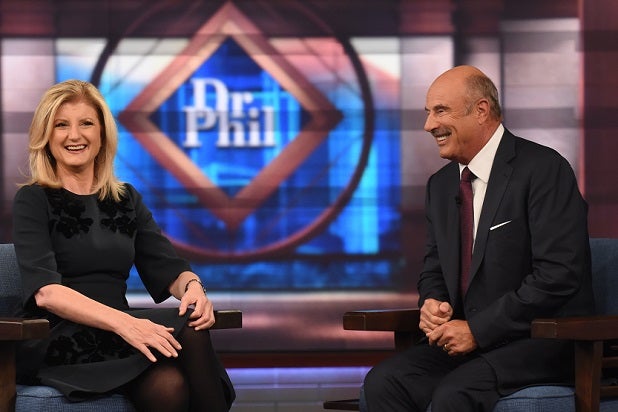 Celebrity advice-slinger Dr. Phil McGraw is pairing up with the Huffington Post.

Starting Wednesday, the titular star of “Dr. Phil” is expanding his brand with HuffPost Dr. Phil, a new vertical section on Huffington Post that will offer behind-the-scenes looks at his daytime talk show, as well as McGraw’s thoughts on topics of the day, and an “Ask Dr. Phil” column, where readers can solicit feedback from McGraw.

See video: Dr. Phil Helps Putin and Obama Talk About Their Feelings on ‘The Tonight Show’

TheWrap spoke with Huffington Post Media Group president and editor-in-chief Arianna Huffington about what to expect from the new venture.

TheWrap: How and why did this collaboration with Dr. Phil come about?
Arianna Huffington: I think it happened after we did the Oprah section. We have a similar partnership with Oprah [Winfrey], which has been very successful. We’re doing more and more around this concept of how do you live your best life and dealing with all the issues that get in the way, as Dr. Phil does. It seemed like a great new section to launch together, especially because, in addition to having what he’s doing on the show and behind the scenes, our readers will have direct access to him with a Dr. Phil column.

See video: Dr. Phil’s Advice for Justin Bieber: ‘Get a Part-Time Job or Something’

What is the draw for him?
I was on his set the other day last week because we recorded something for the launch day, and he was telling me that one of the things that he was particularly excited about was that, if something happens that he wants to respond to or have a comment on in real time, then he’ll be able to do so on the section.

What sort of features will be included on the Dr. Phil section?
We’re going to be dealing with all the issues that he deals with on the show — and not just dealing with them, but also having conversations around them, which of course is the key to the HuffPost DNA. Engaging our readers in conversations around relationships, sex, health, parenting money. Plus the big issues that he and also his wife, who’s going to be part of the section, Robin McGraw, have invested a lot in. His wife has done a lot around domestic violence, so that will be a big issue.

How much content do you see going up in the section on a daily basis?
We will see. We have a lot of content for launch, and we feel that the question is going to be how to curate all of it, because there’s so much content. What’s happening on the show, behind the scenes, Robin McGraw’s content, plus producers who are going to be on talking about how they put a segment on, members of the audience. Plus, of course, around readers and viewers connecting and having their own views on the content. I think that’s so important — the engagement of the reader.

So readers will have the opportunity to weigh in on the content?
Exactly. And to do it in many ways, including on video.

What in particular about working with Dr. Phil appeals to you?
Dr. Phil has had an incredible impact on the lives of millions of people by exploring issues in depth every day and putting the spotlight on the lives and struggles of real-life people. I think that, for me, is what I’ve admired about him for so many years. And now, to have the opportunity to bring this kind of conversation and these issues on the HuffPost platform and make it available to our readers around the world is also exciting. Because we’re going to be translating a lot of that also for other editions. We’re now in 11 countries, and we’re launching in India and in Greece in November. And I think a lot of the issues that Dr. Phil covers regularly are really global issues; they’re not just U.S. issues.

See video of McGraw and Huffington discussing the new partnership below.