Former Nickelodeon star Drake Bell has been arrested in Ohio on charges of endangering children, according to court records.

Bell, whose legal name is Jared, was arrested by Cleveland Police on Thursday and charged with one count each of disseminating matter harmful to juveniles and attempted endangering of children.

According to Cuyahoga County’s FOX 8 News, which first reported the news of Bell’s arrest, the actor “allegedly engaged in an inappropriate chat with the victim that, at times, was sexual in nature.” 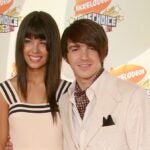 Bell’s attorney did not immediately respond to The Wrap’s request for comment.

Bell entered a not-guilty plea in Cuyahoga County court on Thursday and was released on $2,500 bond. He’s next set to appear in court for a pretrial hearing on June 23.

Bell, known for the Nickelodeon series “Drake & Josh” and “The Amanda Show,” was previously sentenced to 96 hours in jail following a 2015 arrest for driving under the influence in Glendale, California. Last August, the actor was accused of physical and verbal abuse by his ex-girlfriend Melissa Lingafelt in a series of TikTok videos, accusations which Bell has denied.