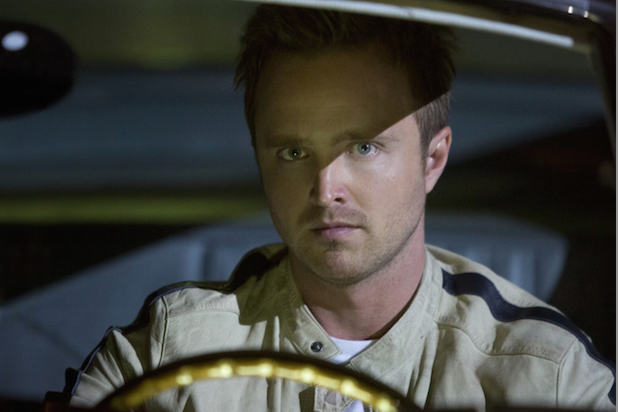 “Need for Speed” arrives in theaters Friday with DreamWorks — and its distribution deal with Disney — under the microscope.

The video game adaptation starring Aaron Paul is tracking well and is projected to rack up north of $25 million its debut weekend. The studio could use a boost: Recent DreamWorks movies such as “The Fifth Estate” and “Delivery Man,” have died quickly at the box office. And there has been growing speculation about co-chairman Stacey Snider‘s future beyond the studio when her contract runs out later this year.

Also read: Stacey Snider From DreamWorks to Fox? ‘The Ball’s in Her Court’

The studio isn’t releasing as many films as expected either: Three years into the five-year-deal, DreamWorks will only have released 11 of the anticipated 30 films it was expected to field.

The studio counts movies like “Lincoln,” “The Help” and “Real Steel” among its box office high points, with misfires such as “The Fifth Estate” and 2011’s “Fright Night” among the low points. Story continues after chart below:

“It’s been a spotty performance,” Tony Wible, a media analyst with Janney Montgomery Scott, told TheWrap. “DreamWorks has had some struggles and they’ve curtailed their production slate, but the types of bets they’ve made have been complementary to the type of films Disney produces.”

Among those compatible pieces were “Lincoln,” which grossed $277 million globally and picked up a boatload of Oscars nods, and “The Help,” which earned $216.6 million globally and awards attention. In those cases, DreamWorks functioned as the studio’s prestige arm, a home for edgier and more artistically-challenging fare, much as Miramax once did before it was sold by the company in 2010. That sale left Disney free to concentrate on the animated films and superhero adventures that fuel its theme park and merchandising empire.

“You need volume at a studio,” Matthew Harrigan, a media analyst at Wunderlich Securities, said. “Films like ‘Lincoln’ appeal to affluent, adult audiences that are different than say ‘Maleficent.'”

Volume provides economies of scale when it comes to theatrical distribution, and strengthens the negotiating position of studios like Disney when dealing with major exhibition chains. That’s become more important as major studios (Disney included) prune the number of films they release annually in favor of fewer, big budgeted event films — leaving them with shelf space to spare.

Disney’s deal with DreamWorks carries little financial risk. In exchange for handling distribution and marketing for Steven Spielberg‘s boutique production company, Disney earns 10 percent of the revenue from the releases, according to an individual with knowledge. Neither DreamWorks nor Disney spoke on the record for this story.

Also read: Hollywood Sets Its Sights on the Next China or Russia

In the wake of the financial crisis, DreamWorks did institute modest layoffs. In 2012, as the second infusion of its $525 million financing deal with Reliance hit, the studio revealed that it was streamlining its slate from five films a year to three — a figure it has still struggled to hit.

“It takes time to establish a rhythm and an identity, and they still seem to be struggling to find that rhythm,” Paul Dergarabedian, senior media analyst at Rentrak, said.

The studio has been effective at keeping costs low. “Delivery Man” may have only eked out $57 million worldwide, but it only cost $22 million to make, and “Need for Speed” carries a comparatively modest $66 million budget. Likewise, the studio has been able to bring in financial partners such as Participant Media and Twentieth Century Fox on “Lincoln,” allowing it to mitigate its financial risk on bolder fare.

Though DreamWorks has favored mid-budget dramas, its blockbuster hopefuls such as “Real Steel” have performed well, grossing nearly $300 million globally on a $100 million budget.

That said, its overall contributions to Disney’s bottom line have been relatively modest. The distribution pact will continue at least through 2016, and could extend longer if there is still funding left over from the original deal.

“I guarantee no one at Disney is losing sleep about whether or not they re-sign,” Harrigan said. “To the extent that it will work within their financial envelope as a standalone product, they’ll be interested.”

Ed. Note: An earlier version of this chart had incorrect information. TheWrap regrets the error