DreamWorks Animation has lined up a new “Croods” series at Hulu and Peacock.

“The Croods: Family Tree,” a spinoff of the 2013 animated feature “The Croods” and last year’s sequel “The Croods: A New Age,” is a six-episode series centered on the character voiced by “Star Wars” star Kelly Marie Tran.

Per DreamWorks, “‘The Croods: Family Tree’ continues the ever-evolving story of the Croods and the Bettermans as they learn to live together on the most idyllic farm in prehistory. The journey from sparring rivals to unlikely friends is fraught with hilarious misadventures as the two families slowly overcome their differences to turn a tree house divided into a tree home united.”

The series premieres on Sept. 23 on both Hulu and Peacock. 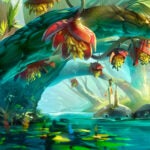 In addition to Tran, the series also stars Amy Landecker (“Kipo and the Age of Wonderbeasts”) as Ugga; Kiff VandenHeuvel (“This Is Us”) as Grug; Ally Dixon (“The Interview”) as Eep; AJ Locascio (“Voltron Legendary Defender”) as Thunk; Dee Bradley Baker (“Kipo and the Age of Wonderbeasts”) as Sandy; Artemis Pebdani (“Big City Greens”) as Gran; Darin Brooks (“The Bold and the Beautiful”) as Guy; Matthew Waterson (“Tales of Arcadia”) as Phil; and Amy Rosoff (“Scandal;” “Criminal Minds”) as Hope.

The last TV entry in the “Croods” franchise was the 2D-animated series “Dawn of the Croods,” which ran for four seasons between 2015 and 2017 on Netflix.