‘The Croods: A New Age’s’ Big Challenge: Creating a New World During a Global Pandemic

TheWrap awards magazine: ”We had great momentum and chemistry, and then it was like, Wait — we’re going to have to do all of this separately in our homes?“ says first-time director Joel Crawford

A version of this story about “The Croods: A New Age” first appeared in the Oscar Nominations Preview issue of TheWrap’s awards magazine.

The original “Croods” movie came out in 2013, made almost $600 million worldwide and was nominated for an Oscar, so it’s no surprise that DreamWorks Animation announced a sequel that same year. What is unusual is that it took the company seven years to complete “The Croods: A New Age,” since the company’s history has been to space its sequels at intervals of three or occasionally four years.

But with delays in production and then DWA’s move from 20th Century Fox to Universal, the project stalled until first-time director Joel Crawford and producer Mark Swift came on board in 2017, inheriting the core idea of the Croods family of prehistoric cave-dwellers meeting another, more advanced family with a different worldview.

“The themes of following the light and searching for tomorrow, and the idea of this family having to stick together in an unknown and uncertain world — I wanted to carry those over from the first movie, but not just repeat them,” Crawford said.

The voice cast of the first film returned: Nicolas Cage, Emma Stone, Ryan Reynolds, Catherine Keener and the late Cloris Leachman reprised their roles. Newcomers Peter Dinklage, Leslie Mann and Kelly Marie Tran joined as the Bettermans, a family so technologically advanced that they live in a split-level treehouse with indoor plumbing and windows looking out on a verdant jungle paradise.

And that meant that part of the job for Crawford and team wasn’t just to come up with a story, but to design the whole world in which the Bettermans lived, a dramatically different one than the Croods’ usual domain. 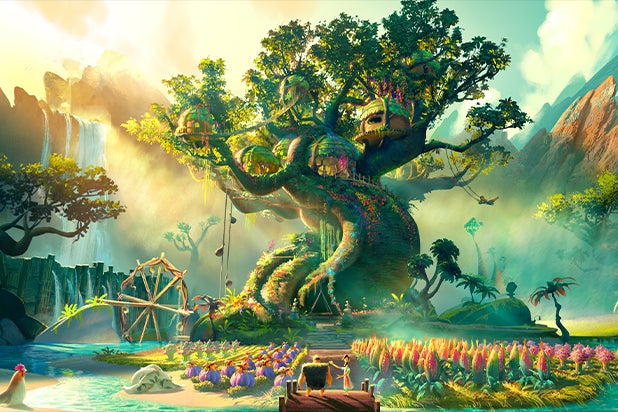 “That was definitely a big undertaking,” Crawford said. “We treat the Bettermans’ world as the equivalent of the modern world. The sky’s the limit when you’re creating a world and the story is reflected in the world. And what I mean by that is the theme of this story is basically two very different families meeting and judging the book by its cover, and then on further inspection realizing there’s so much more than meets the eye.

“The guidance I gave to the production designer and the art team was as we create these worlds, even the Bettermans’ world shouldn’t appear as just one thing. It looks like they have everything perfect, only to find out it’s a gilded cage.”

For Crawford, the challenges of the film included those that any first-time director faces, along with a fresh hurdle specific to 2020. “At first, there was that feeling of trying to get it all right — trying to hold the whole story in your head and to know the locations and the characters, and then realizing that I can rely on some of the best specialists in the world in every single department,” he said.

“But then the biggest thing we encountered, like everybody else, was the pandemic. At that point we had about half the movie finished, and we had to finish the rest from home.”

The adjustments, he said, took a while. “It really took the wind out of us for a beat. We had great momentum and great in-person chemistry, and then it was like, Wait — we’re going to have to do all of this separately, in our own homes? How are we going to do this – not only technically, but on a human connection level?

“But what was really cool was just to see the creativity of everybody being able to work around it. We really proved we could do this from home.”