The most successful animated feature in theaters for the past month has been the comic tale “How to Train Your Dragon,” but that’s not the title you’ll hear if you watch the film’s television commercials.

Instead, in an intriguing bit of midstream re-branding, the TV spots changed a couple of weeks ago: initial ads used the film’s actual title, but current ones substitute a voiceover that twice refers to the film as “DreamWorks’ Dragons.”

Not just “Dragon,” or "Dragons," but “DreamWorks’ Dragons.” The move links the studio name with the movie in a way that’s extremely rare outside of Disney, which has been known to incorporate its name into titles. (Witness last year’s “Disney’s A Christmas Carol.”) 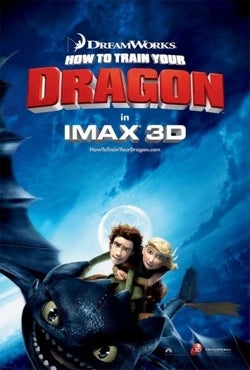 At least four earlier TV spots referred to the film by its full name. But after the film’s release, the studio introduced a new TV spot in which the voiceover says, "Rolling Stone raves, DreamWorks’ Dragons is funny, touching and works miracles in 3D," and then uses the "DreamWorks’ Dragons" name once more at the end of the ad.  (The Rolling Stone review does use the words funny and touching and the phrase "works enough miracles of 3D animation," but it never actually mentions DreamWorks by name.)

So what’s going on? Is it a case of Disney envy, or maybe even Pixar envy – an attempt to use the hit movie to boost a brand that may not be as closely identified with animation as its biggest competitors?

DreamWorks Animation, run by former Disney executive Jeffrey Katzenberg, says no. ‘The shortened title came about organically, as a result of fans’ referencing as such,” said a spokesperson for Paramount Pictures, which handles distribution and marketing for DreamWorks. “Because it fit with the movie, we took the step to incorporate it into our campaign.”

Others suspect that the move is designed to capitalize on a critical and commercial success by a company that has spent a decade and a half trying to position itself as a major player in the animation field.

Doug Ward, the academic administrator of the animation program at UCLA, agrees that the change is an attempt to reinforce the brand, and establish more firmly that the DreamWorks name means quality animation in the same way that Pixar and Disney do.

Ward, who ranks DreamWorks second behind Pixar among today’s animation studios, says the move reminds him of Disney’s use of the phrase “Disney DVD” on its home-video releases, as if a “Disney DVD” were somehow a different animal than a regular DVD.

“It’s all about branding now,” said Ward, who then joked, “[on home video] it should be ‘DreamWorks’ Dragon’ on ‘DreamWorks DVD.”