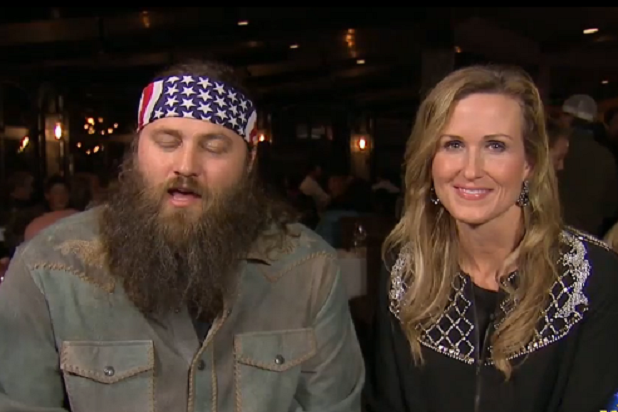 Apparently the Robertson family’s New Year’s Eve resolution is to choose their words carefully in 2014.

Willie and Korie Robertson, of the hit A&E series “Duck Dynasty,” appeared on Fox News Channel’s “All-American New Year’s Eve” special Tuesday night, in their first interview since family patriarch Phil Robertson was reinstated on the series. The elder Robertson’s suspension was sparked by anti-gay comments he made in a GQ interview.

Anyone hoping for fireworks would have to wait for the pyrotechnics display that might accompany the ringing in of the new year.

Despite the attempts of Fox News’ Bill Hemmer and Elisabeth Hasselbeck to prod the Robertson couple on the controversy, a sexy soundbite was not forthcoming from the reality TV sensations.

“Well, we’re just glad to be back to work. And A&E and us are fine,” Willie Robertson offered. “The Robertsons, we’re looking forward to getting back to making some funny shows, and it’s a new year. So we’re ready to break in a new year and start it all over again.”

Hit with a follow-up question on the family’s decision to stick with A&E, Willie Robertson — who leads the family duck-call business Duck Commander — offered little beyond the fact that the family was “ready to move on” and that they “all learned a lot” from the drama that unfolded over the previous two weeks.

Robertson also reminded viewers that a new season of “Duck Dynasty” is nigh. (Mark Jan. 15 on your calendars, fans.)

Wife Korie, meanwhile, chimed in that she’s “just glad the family’s all together and that “we’re happy, happy happy.”

Phil Robertson found himself in hot water after GQ published an interview in which the reality star, among other things, lumped gays in with terrorists and drunks. A&E initially put Robertson on an indefinite suspension, but reversed that decision shortly thereafter, following protests from fans and conservatives.

Meanwhile, Gawker reports that the Robertson clan has paired with weapon manufacturer Mossberg for a “Duck Commander Series” of guns. The line of 12 guns come with an appropriate camouflage pattern and the words “Faith. Family. Ducks.” stamped on them.

Praise the lord and pass the ammunition.