Dwayne Johnson showed off his deeper side during an appearance on “The Late Late Show with James Corden” on Wednesday, busting out a rendition of “How Deep Is Your Love” by the Bee Gees (among other songs) during a golf cart karaoke session.

Eschewing the traditional in-studio interview, Johnson and Corden took a golf cart tour around the backlot where “The Late Late Show” is filmed, discussing everything from Norman Lear to the resistance Johnson faced when he moved to L.A. and started his career as an actor.

“When I got to L.A., that’s when I was told, ‘You can’t be as big, you gotta lose weight, you gotta go on a diet, you can’t call yourself The Rock, you can’t talk about professional wrestling,’ so it was all that,” Johnson told Corden. “And if you don’t know any better, then you buy into it. There was no blueprint when I first got here, so you either follow something that you think is the right thing to do or you say, ‘F— it, I gotta be myself.’ The turning point for me was when I said, ‘Look, I don’t want to remain on a lifelong diet just to be on the thinner side.’”

In between the chit-chat, Johnson and Corden made a stop at the gift shop, where Johnson picked out some CBS merchandise (cross-promotion!), and surprised fans they met waiting in line for “The Price Is Right.”

This being Corden and all, the golf cart ride wouldn’t be complete without more karaoke. Johnson and Corden first jumped into a hearty rendition of “You’re Welcome” from “Moana” before launching into Johnson’s recent rap verse on Tech N9ne’s “Face Off.” The “Red Notice” star told Corden that Tech N9ne originally just wanted Johnson to talk over the track.

“He wanted me to originally do just a spoken word at the end, and when I heard the song and those guys were just delivering fire, I said, ‘Tech, I’ve got this crazy idea. It’s either great or f—ing terrible.’”

Then for the final karaoke song, Johnson made a surprising choice and went with the aforementioned “How Deep Is Your Love” by the Bee Gees.

Check out the full video above. 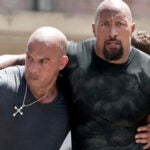