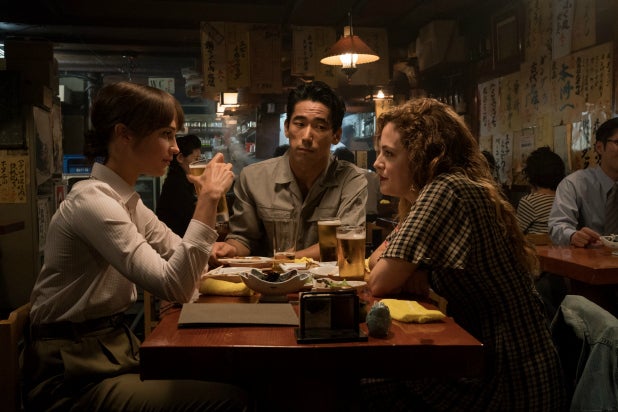 It would be nice to report that Wash Westmoreland’s “Earthquake Bird” was, well, anything really.

It’s almost a romantic melodrama, but it’s emotionally inert. It’s almost a biting statement about cultural appropriation, but it barely shows its fangs. It’s almost a murder mystery, but it abandons the plot for vast periods of time. It’s almost a good film except, no, that’s really stretching it. At its best it’s an unfocused plod.

Alicia Vikander stars as Lucy Fly, a translator working in Tokyo in 1989, who appears to be working on the subtitles for Ridley Scott’s “Black Rain.” Her friend Lily (Riley Keough) has gone missing and a piece of her may have just been discovered in the river. That’s when detectives bring Lucy in for questioning and wind up hearing her side of a very long, yet surprisingly uneventful story.

It seems Lucy once met a handsome photographer named Teiji (Naoki Kobayashi, “Tatara Samurai”) while he was standing in the middle of the street taking pictures of puddles. They awkwardly fancy each other and begin a long, mostly emotionless relationship in which he takes her picture, over and over again, while she tries to connect to him on a more intimate level. Which is hard to do since he spends more time talking about photography and his ex-girlfriend than he ever does about her.

Their red-flag-riddled relationship gets even trickier when a mutual friend introduces Lucy to Lily, an American who just moved to Tokyo, doesn’t know the language, and quickly latches onto our quiet protagonist. Lily establishes herself as a regular third wheel in Lucy’s relationship with Teiji, and as they all spend more time together, Lucy gets increasingly paranoid that Lily is actually the big wheel, while Lucy is only the spare.

Meanwhile, Westmoreland’s film has completely neglected to keep Lily’s eventual disappearance alive in the narrative. Without any looming death to keep this listless melodrama focused, all “Earthquake Bird” is left with is listless melodrama. Westmoreland (“Colette”) and editor Jonathan Alberts (“45 Years”) even seem to have trouble keeping the separate timelines coherent. It takes some time after Lucy’s initial interrogation for the film to make clear that she didn’t meet Teiji after Lily went missing, and that we are instead watching flashbacks. The film isn’t cleverly subverting our expectations for a greater purpose in these moments; it’s just vague and confusing.

Vikander, one of the most exciting and nuanced performers to emerge this decade, is stranded in a film that keeps her, her feelings and her backstory hidden for most of the running time. The dark circles under her eyes tell us more about Lucy than most of her dialogue, and the few moments that are extremely telling are never again explored. When one of the detectives tells Lucy, “You’re not like Japanese women,” she fiercely snaps back, “Yes I am.”

But what, exactly, does that even mean to Lucy? We know she escaped a troubled family life and no small amount of childhood trauma, but other than that, all we know for certain is that she — just like Lily, albeit with superior language skills — is a westerner escaping into another culture. Lily tries to fit in, at one point letting a friend dress her in a refined kimono, but the sight of her in traditional attire leads to a tragedy so unexpected and bizarre that it’s practically comical.

Not that we couldn’t use a good laugh in “Earthquake Bird.” The film is a dreary experience, enlivened only by Keough’s effervescent performance. But the film treats her like a plot contrivance. She’s the other woman, the boisterous American, the treacherous friend, the sexual threat, but never gets treated like a three-dimensional being. It’s clear that Keough is infusing Lily with nuances that Lucy, in her jealousy, cannot see. The problem is the movie seems to miss most of her efforts as well, and instead uses her just to prop up the limp suspense and limper mystery.

For a film set in Japan, “Earthquake Bird” doesn’t treat its Japanese characters very well. Teiji is distant and manipulative, Lucy’s various friends hardly get enough screen time to register, and even the detectives spend more of their time helping Lucy through makeshift therapy sessions than actually doing their jobs. After hearing Lucy’s greatest tale of woe, they extend their sympathy and admit it’s a very sad story. The joke — or it would be if “Earthquake Bird” had any self-awareness — is that Lucy shrugs and admits that it has nothing to do with the plot.

An “Earthquake Bird,” as described in Westmoreland’s film, is a bird that sings right after an earthquake, giving the all-clear. Let this review be your earthquake bird. The movie was very sad, but it’s all over, there’s nothing left to see here, you can move along now, and don’t worry, it’s not too late to get your money back.