The host of Friday night’s Film Independent Spirit Awards, British comedian and actor Eddie Izzard, has made more big-budget studio films than low-budget indies. But it’s not his acting resume that makes him an unlikely host for the 25th edition of the show, which has moved to a late-night, downtown Los Angeles location after years of being a Saturday afternoon beach soiree.

Rather, what makes his choice unusual is that Izzard has never before hosted an awards show. With a loose, anarchic, rapid-fire comedic style that depends to a great degree on improvisation and was inspired by the likes of Monty Python, he may be a bit unhinged for most Hollywood kudofests. If the Spirit Awards are trying to prove they can still be the fun, irreverent alternative to the Oscars, however, he could be just the ticket.

Documentary “Believe – The Eddie Izzard Story” was released on DVD this week. On the eve of its release, Izzard was still trying to figure out exactly how this Spirit Awards gig is going to work. 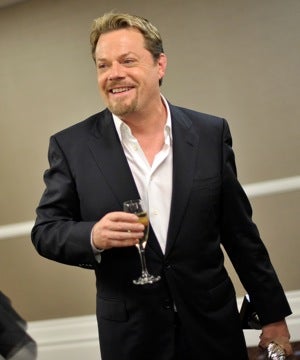 Where do you stand on the awards show rehearsal issue? Are you going to rehearse a lot, the way they do for the Oscars, or not at all, like Ricky Gervais?

I don’t know how to rehearse, really. Apparently this show is loose and relaxed, but there’s got to be some sort of rehearsal, I suppose. I don’t know. I haven’t done an awards show before, and I won’t do one again.

So why do this one?

Well, they needed someone. Somebody died, I think. Someone blew up, or their leg fell off. And I like the spirit of independence, which is what America was built of in the first place. The massive making of money was not the key thing in that 1776 declaration, I don’t think. It was all about people being equal and stuff … except for Jefferson’s slaves. And with President Obama, one feels that that’s been put to bed slightly.

So it’s that spirit that I like. I try to work in a very independent way, so I’ll do this for them.

So they’re not listening. Yeah. It’s not a gig that one should do. No one’s paying attention, and my stuff needs full attention.

The worst ones, actually, are music awards. That’s just a lot of guys in suits who are looking around for who they can shag that night, and a whole bunch of young kids screaming because someone told them to scream. And then no one can hear because they don’t even mike it up. At least this one they will be able to hear. But they’ll be at their tables talking. “Hey, how are you doing?” “What did he say?” “I don’t know.” It’ll be one of those.

What will we hear on Friday night? Movie-related humor?

No. I think it’ll be awards-related humor. I’m interested in humans, ego, awards, how that fits into civilization. What awards did the Greeks give? The Egyptians? Why do we do it? That’s what I’m interested in … (pauses) I think I want to talk about God. ‘Cause America’s got such a weird thing about God. There is no God, of course, and we’ve discovered that in Europe. The pope gets up and says stuff, and no one listens. Well, lots of people listen, but it really doesn’t figure like it does here. You can’t get elected with God in Europe. You can’t get up and say, “God bless Europe,” or you’d be laughed out of town.

But you can’t get elected without God in the United States.

Yeah. That’s the one big weird thing. Even the people who are not even religious, they probably have to hit you up with God, in a way. And, you know, people with God can do a lot of very positive things for humanity. But then they can have some idea that just slows everything down.

Given the difficulties of awards shows, are you looking forward to doing it?

I’m … (pause) … looking forward to having done it in a decent way. I really can’t tell how it’ll be. It’d be much easier for me to play Madison Square Garden or Wembley Stadium. This is tricky. It’s something I haven’t done, and I know I’m gonna get there and there’s gonna be a guy going, “Three, two, one, cut to this, cut to this, cue him,” and all that crap.

It’s like with Craig Ferguson. I know Craig Ferguson from before, and I see what he’s doing with his show, and I would hope that if I was doing a show like that, I would be in an area like that. Especially the way he talks in his monologues. There’s a place in there, a spontaneous place, which I find interesting, and which I think the audience will find interesting. But whether I can land that … (shrugs) It’s going to be interesting.

I know I can do stuff, but I can’t prove that this is going to work, because I’m just not that guy who’s the TelePrompTer guy. I’m the non-TelePrompTer guy. I think I’m gonna try and write out some opening doo-dah, but I just haven’t done this before.

But you know what the job requires.

Well, yeah. I’ve seen these shows happen, so I know that someone comes on and says the bit that’s been written: “Filmmakers believe in the sanctity of cheese,” something like that. But I really don’t know what it’ll be like when I do it. I can’t promise you X or Y.

You mentioned Craig Ferguson – when he does his monologue, he puts topics on his TelePrompTer instead of writing out entire jokes.

Excellent. Excellent. That’s how it should be. ‘Cause that’s what I do. I have a set list when I go onstage, in case I forget what I’m talking about.