Anyone who is a fan of filmmaker Edgar Wright’s movies will know that he’s a giant cinephile with a knack for countless references and needle drops to older decades and classic filmmakers. But his new film “Last Night in Soho” warns that idolizing the past too much can be trouble.

In a video interview with TheWrap’s Beatrice Verhoeven at the Toronto International Film Festival, Wright and screenwriter Krysty Wilson-Cairns described “Last Night in Soho” as a psychological thriller that slowly dips into full on horror. But, Wright add, the film is a “cautionary tale” about nostalgia and the illusion that there was ever a “good old days.”

“The moral of the story is, even if you could travel back in time, you can’t have the good without the bad, so it’s sort of a cautionary tale for those who are overly nostalgic about the past,” Wright said. “There is no perfect decade where everything was good and nothing was bad. It doesn’t exist…They like to imagine it was all better before but, of course, that’s not true.”

“Last Night in Soho” specifically is the story of a teenage girl (Thomasin McKenzie), who is obsessed with the fashions and styles of the ’60s. When she travels to London with dreams of being a fashion designer, she discovers that she can see visions of London in 1965. After witnessing the murder of a singer named Sandy (Anya Taylor-Joy), she goes on a mission to track down the killer that’s still out there in present day.

Wright has been thinking about the story for “Last Night in Soho” for the better part of a decade, and he even first considered Taylor-Joy for a role after seeing her in “The Witch” at Sundance in 2015. But as Taylor-Joy has blossomed as an actress and movie star, he realized that the part he initially envisioned for her, the lead character and fashion designer, might not be right.

“By the end of the first draft, I said to Anya, I’m sending you the script for ‘Last Night in Soho,’ however, I’d like for you to look at the part of Sandy instead of Eloise,” he said. “And to my ongoing delight, she said, I’d love to do the movie and I’d love to play Sandy.” 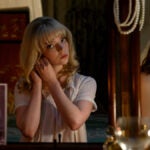 Also Read:
‘Last Night in Soho': Thomasin McKenzie Witnesses a Murder Decades in the Past in New Trailer (Video)

That opened up an opportunity for him to cast McKenzie as Eloise, whose own journey to London perfectly mirrored the journey of her character.

“There’s something very powerful, which you don’t always get the ability to do, is casting an 18-year-old as an 18-year-old,” Wright added. “She’s living through the story in this very vicarious way.”

“Last Night in Soho” is screening at the Toronto International Film Festival and will open in theaters from Focus Features on Oct. 29. Check out the full interview above.