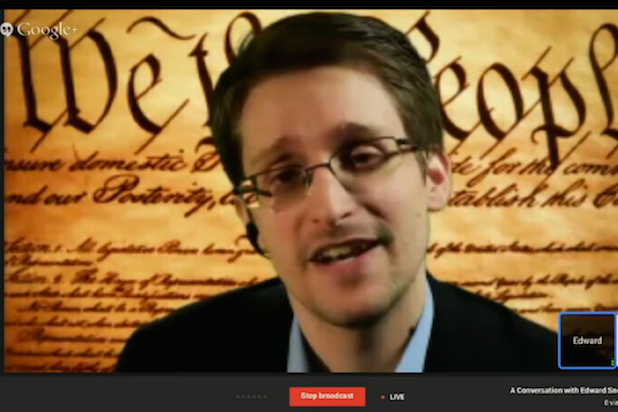 Edward Snowden, speaking from exile in Russia via a highly encrypted connection, told a South by Southwest gathering Monday that secret data collection — the likes of which he blew the whistle on when he outed the National Security Agency — is “setting fire to the future of the Internet.”

The antidote, Snowden said, will come from developers — whose challenge is to make secure, encrypted communication easy for the average user.

“The global mass surveillance that’s happening … they’re setting fire to the future of the Internet,” Snowden told the packed hall at the SXSW Interactive Festival in Austin, Texas, his first appearance in front of an audience since his self-imposed exile began. “And the people in this room now — you guys are the firefighters.”

Via a satellite connection (which organizers noted was routed through seven proxies to avoid exposing his location), Snowden participated in the video interview alongside Christopher Soghoian, principal technologist for the American Civil Liberties Union.

Though Snowden gave up his freedom to do so, his actions have already been a massive boon to the public, Soghoian said.

“His disclosures have improved Inernet security. And they haven’t just protected us from government surveillance,” Soghoian said. He noted that widespread private reforms in the wake of Snowden’s disclosures — better security on the wifi at Starbucks, for example — have made life more difficult for hackers, identity thieves, stalkers and other cyber criminals.

Snowden, a former CIA employee and NSA contractor whose disclosures last year touched off a firestorm of debate over mass surveillance, is not against the practice wholesale — he even sees value in it — but believes the process should be transparent and more targeted.

For instance, monitoring everyone’s communications rather than “suspect” communications has its downside: “That lack of focus has caused us to lose leads that we should’ve had,” he said, citing the Boston Marathon bombers and “underwear bomber” Umar Farouk Abdulmutallab.

It’s the responsibility of public officials to make sure government surveillance programs are acting properly and efficiently, and that’s not happening right now, he said.

“When we have House committees championing the NSA instead of holding them to account … that’s an incredibly dangerous thing,” Snowden said.

Asked by an audience member whether it was any worse for governments to track user data as opposed to corporations, his answer, in a nutshell, was: Yes, it is.

Snowden and Soghoian agreed that data collection is OK, as long as it’s being done with users’ knowledge and consent. Government spying on private citizens also needs to be open, and subject to healthy public debate.

To that end, Snowden and Soghoian believe that because the average user won’t actively seek out complicated security protocols — from sophisticated encryption apps to obscure Facebook settings — it’s encumbent on developers at communication companies to figure out how to defeat untoward surveillance.

“What I want is the next Whatsapp or Twitter to use encrypted end-to-end communication,” Soghoian said.

Snowden concluded his comments with a justification for actions that made him a fugitive — as well as a traitor or a patriot, depending on whom you ask:

“Regardless of what’s happening to me, I took an oath to defend the U.S. Constitution, and I saw the constitution was being violated on a massive scale,” he said. “I did what I had to do.”