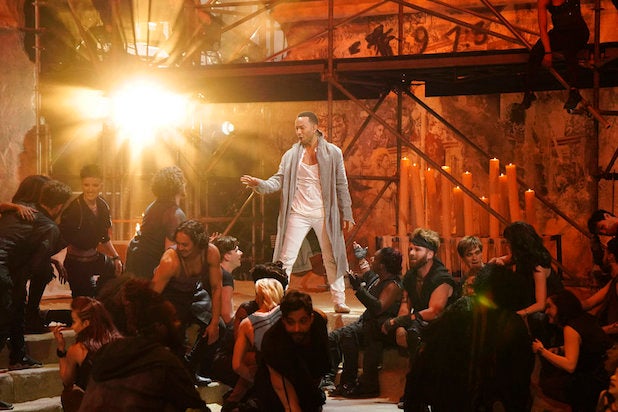 The entertainment industry grand slam known as the EGOT is so rare that only 12 people in history have completed it by winning an Emmy, a Grammy, an Oscar and a Tony. And no calendar year has seen more than two new EGOT winners.

But that could change this year, because Television Academy voters have nominated five different people who only need an Emmy to complete their EGOT — and three of them could win at the same time if “Jesus Christ Superstar Live in Concert” takes home the award in the Outstanding Variety Special (Live) category.

Those three are John Legend, who starred in the title role of the Easter Sunday special on NBC, and Andrew Lloyd Webber and Tim Rice, the composer and lyricist of the original 1970 musical.

All three are credited as executive producers on “Jesus Christ Superstar Live in Concert,” so all will take home Emmys and complete their EGOTs if the program wins.

Legend could also win an EGOT by himself in the Outstanding Lead Actor in a Limited Series or Movie category, where he is also nominated.

The other two potential EGOT winners are Benj Pasek and Justin Paul, who wrote the stage musical version of the holiday film “A Christmas Story” and were nominated for the song “In the Market for a Miracle,” a new composition written for the television version.

Legend, Lloyd Webber, Rice, Pasek and Paul are five of the eight living people who only need an Emmy to complete the EGOT. The others are songwriters/composers Elton John, Alan Menken and Stephen Sondheim. (Menken has received a Special Emmy Award, but not a competitive one.)

Legend has 10 Grammys going back to his Best New Artist award in 2006; an Oscar for the song “Glory” from “Selma”; and a Tony for producing the 2017 Broadway revival of “Jitney.”

Lloyd Webber and Rice won Grammys, Oscars and Tonys for their 1980 musical “Evita” and its 1996 film adaptation.

At this point, “Jesus Christ Superstar Live in Concert” is considered one of the favorites in the Outstanding Variety Special (Live) category. In recent years, the category, which was formerly called Outstanding Special Class Program, has been won either by a live musical (“Grease: Live” in 2016, “Sweeney Todd (Live From Lincoln Center)” in 2015) or by the Tony Awards (every other year since 2010).

But last year’s Tonys were hosted by Kevin Spacey in one of his last appearances before his career collapsed in scandal – and CBS and the American Theatre Wing subsequently opted to not even submit the Tonys, taking a formidable contender out of the running.

The other nominees in the category are the Oscars, Grammys and Golden Globes telecasts, as well as “The Night of Too Many Stars” autism benefit.

Legend will have a harder time winning in the acting category, where his competition is Antonio Banderas in “Genius: Picasso,” Darren Criss in “The Assassination of Gianni Versace,” Benedict Cumberbatch in “Patrick Melrose,” Jeff Daniels in “The Looming Tower” and Jesse Plemons in “USS Callister (Black Mirror).”

Interestingly, seven of the 12 previous winners — Rodgers, Moreno, Gielgud, Hepburn, Hamlisch, Nichols and Goldberg — completed their EGOT by winning an Emmy. Hayes and Rudin completed it by winning a Grammy, Brooks and Tunick by winning a Tony and Lopez by winning an Oscar.