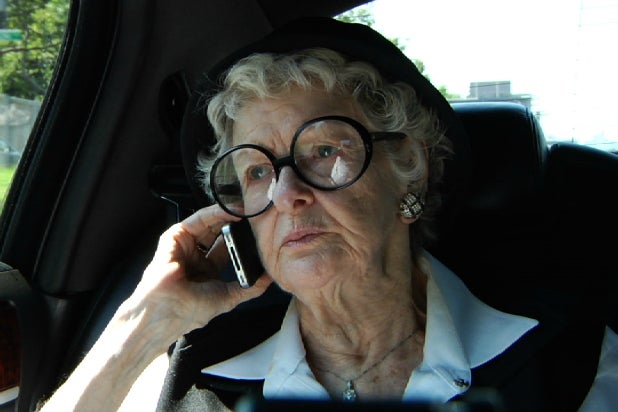 Stephen Sondheim didn’t write the anthem “I’m Still Here,” about an aging show-biz veteran proclaiming her endurance and her survival, specifically for Elaine Stritch, but she’s lived the kind of life that makes her more than entitled to sing it. And in the new documentary “Elaine Stritch: Shoot Me,” we not only get to hear her perform this legendary song, we learn why she earned the right to do so.

As interviewee Cherry Jones observes, Stritch is one of the last surviving remnants of the golden age of American theater, and as Stritch shows us her photographs, we see her evolve from a young chorine (who sang “Bongo, bongo, bongo/I don’t want to leave the Congo”) to the actress who would inspire Noel Coward to write a show for her, who would play the lead in “Who’s Afraid of Virginia Woolf?” and who would steal a formidable show by singing “Ladies Who Lunch” in Sondheim’s “Company.”

All of this, incidentally, happening decades before her late-in-life renaissance that included winning a Tony for her one-woman show “Elaine Stritch: At Liberty” and an Emmy (plus four additional nominations) for pulling focus from Alec Baldwin and Tina Fey on “30 Rock.”

Chiemi Karasawa, making her directorial debut, follows Stritch through the rehearsals for her latest revue, an evening of Sondheim songs, which allows us the treat of enjoying the 87-year-old performer singing great material while also providing a glimpse into her dogged work ethic.

Overall, “Shoot Me” follows the groundwork laid out by the recent “Joan Rivers: A Piece of Work,” alternating between look-where-she’s-been historical footage (live TV appearances, Stritch’s work opposite ex-boyfriend Rock Hudson in “A Farewell to Arms”) and look-at-her-go glimpses of her current busy schedule.

There are also heartfelt testimonials from friends and collaborators, including Baldwin (one of this documentary’s executive producers), Fey, Jones, John Turturro, Nathan Lane, directors Hal Prince and George C. Wolfe, and the late James Gandolfini (to whom the film is dedicated).

Also read: Elaine Stritch at Tribeca: ‘Nobody Said Anything About Retiring’

“Shoot Me” avoids being straight hagiography by including discussion of its subject’s ego and irascibility, to say nothing of some scary health-related moments. (Despite battling alcoholism and diabetes, Stritch insists that she should be allowed one daily cocktail, which leads to some hairy situations.)

Karasawa also includes a memorable clip from D.A. Pennebaker’s documentary about the recording of the “Company” cast album in which Stritch, disappointed with her vocal performance, screams “WRONG!” at her own playback, a moment of frustration and self-critique to which any artist can definitely relate.

Stritch isn’t just a one-of-a-kind performer; in a lot of ways, she’s the last of a majestic breed whose like will never be seen again in popular culture. Even though the actress herself successfully burnished her own legend with “At Liberty,” it’s great to have this cinematic love letter to remind us that she was ever here at all. And is, dammit, still here.