You wouldn’t expect an ultra low-budget movie shot in 10 days to spawn a sequel, but that’s exactly what last year’s South by Southwest premiere “Women in Trouble” has done.
And you’d hardly expect that sequel, “Elektra Luxx,” to attract a wide variety of known actors, or to make up the middle part of a trilogy – but it does have a wide-ranging cast, and according to writer/director Sebastian Gutierrez, who debuts his new film Sunday night at SXSW, a third installment is already in the works.

“Why should trilogies only belong to ‘Star Wars’ and ‘Lord of the Rings?’” asks Gutierrez, a 35-year-old, Venezuelan-born director who has also worked on studio films like “Gothika,” “The Big Bounce” and “Snakes on a Plane.” “Although it isn’t really a trilogy as much as a bunch of friends who wanted to work together, and kinda grabbed these characters and moved them around in different, related stories.”
“Women in Trouble,” an episodic comedy about nine women in Los Angeles, starred Carla Gugino, Josh Brolin, Simon Baker (“The Mentalist”), Marley Shelton (“Eleventh Hour”), Emmanuelle Chriqui (“Entourage”), Adrianne Palicki (“Friday Night Lights”), Elizabeth Berkley (“Showgirls”) and a cameo by Joseph Gordon-Levitt (“(500) Days of Summer”), among many others. “Elektra Luxx” follows Gugino’s title character, a retired porn star; brings back Chriqui, Shelton and Palicki; makes Gordon-Levitt the narrator; and adds the likes of Timothy Olyphant (“Deadwood”), Vincent Karthiser (“Mad Men”), Malin Ackerman (“Watchmen”), Justin Kirk (“Weeds”) and Kathleen Quinlan (“Apollo 13”).
It also includes a “really cool cameo” by a four-time Oscar-nominated actor whose identity Guitierrez won’t reveal.
“I’d love to tell you that the writing was so brilliant they couldn’t resist, and they all had to pass on huge jobs to do this movie,” says Gutierrez. “But the non-romantic explanation is that the time commitment is very small. People come in for a day or two. If you’re shooting in L.A., it’s fairly simple to get people to commit to one day on a teeny movie, rather than six weeks. 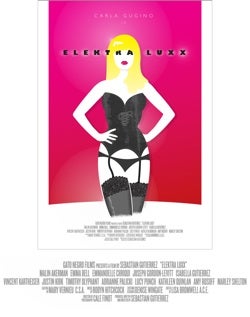 “And there aren’t that many roles for women. So women are very wiling to show what they can do when they don’t have to just be the girlfriend.”
“Women in Trouble” began, he says, when he was perusing the script he’d written for a movie that was never made, and he came across a 10-page, dialogue-heavy scene between two women getting ready to go out for the night.
“I thought, I could probably get a couple of high-def cameras and shoot this in one day and have a pretty cool little short,” he says. “But once I started to assemble a crew for it, I realized it was kind of a shame to assemble everybody for one day. I thought, if I write nine more of these 10-page segments and interconnect them, we could maybe make a movie in 10 days.
“It was a pretty silly idea, but it’s basically what we did, and ‘Elektra Luxx’ is a more refined version of that.”
Plans for the second film, he says, were hatched midway through production on the first, when the cast and crew were having so much fun that they started making plans to do it again. Again, it takes place over the course of a single day, although this time he took a full 15 days to shoot it – “really decadent,” he says with a laugh.
“The first movie we were trying to do 10 pages per day, roughly 10 minutes,” he says. “This time we had some days that were only five pages. Very civilized.”
The scenes were rehearsed and shot like a play, he says, but “Elektra Luxx” – in which the title character learns she’s pregnant – was also more ambitious: it includes a musical number, and a black-and-white flashback to the 1950s.
Like "Women in Trouble," "Elektra Luxx" goes to SXSW in search of U.S. distribution; the first film was picked up by Screen Media at last year’s festival.
The third film, says Gutierrez, will be called “Women in Ecstasy,” and will include “pretty much almost everybody” from the first two films. And since the first film was shot in 10 days and the second in 15, does that mean the third will have a luxurious 20-day shoot?
“It could be 20 days,” he says. “Maybe 21. We’ll go crazy.
"I think the whole point is that we’ve all worked for the studios and made these big movies. And without being a technology geek, finally the price of the technology is not an impediment to making a movie. So I think there is a bit of the DIY punk movement of the late ‘70s – of, like, ‘let’s go make instant movies.’ Some of them will be better, some of them will be worse.”
Despite the porn-star title character and its genesis in a film called “Women in Trouble,” Gutierrez insists that “Elektra Luxx” is not meant to be campy; he’s trying to make a real movie, with comedy and drama and a genuine structure to it.
“The challenge is, can you bring a movie down to its very bare bones, with a crew of 10 instead of a crew of 90, and still have great actors and have it look professional? In the most naïve part of myself, I feel that you can tell almost any story with two or three people in a room.”