Screen Media has acquired the North American rights out of the Cannes market to “Christmas in the Caribbean,” a romantic comedy that stars Elizabeth Hurley, TheWrap has learned exclusively.

The film comes from MSR Media International and is written and directed by Philippe Martinez (“A Week in Paradise,” “One Year Off,” “Father Christmas Is Back”). Screen Media is planning a day-and-date theatrical and on-demand release for the film beginning in November of this year.

“Christmas in the Caribbean” follows a woman named Rachel, who is left at the altar by her fiancé and decides to take her best friends on her honeymoon to the Caribbean, where she gets her groove on and finds love on the beach. Nathalie Cox co-wrote the film and also co-stars, as does Caroline Quentin.

“Christmas in the Caribbean” is also a reunion between Martinez and Hurley, who worked together on Hurley’s most recent film “Father Christmas Is Back” from last year. 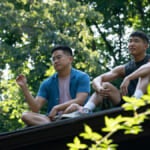 “’Christmas in the Caribbean’ was my fourth film shot in the beautiful islands of St. Kitts and Nevis with my dear friend and exceptional artist Elizabeth Hurley. I am so happy to have the fantastic team at Screen Media come on board to distribute ‘Christmas in the Caribbean’ – they are the ideal partner to introduce this romantic comedy to audiences in the U.S.,” Martinez said.

“The title of ‘Christmas in the Caribbean’ really says it all for us,” Screen Media said in a statement. “We love the stunning tropical setting of the film, the romantic ‘second chance at love’ storyline blended with a holiday-themed story of togetherness, and of course, the striking cast led by the inimitable Elizabeth Hurley.”