Based on a short story of the same name by Victoria “V. E.” Schwab, the show centers on Julliette Fairmont — who was born a vampire but is determined to not be a monster — and Calliope Burns, a fearless, headstrong monster hunter. Sarah Catherine Hook (“The Conjuring: The Devil Made Me Do It”) was previously cast as Juliette, with Imani Lewis (“The Forty-Year-Old Version”) set to play Calliope.

Mitchell will play Margot, a member of the vampiric Fairmont clan. In addition to Mitchell, Aubin Wise, Jason Robert Moore, Gracie Dzienny, Will Swenson, Phillip Mullings Jr., Dominic Goodman and Dylan McNamara have also joined the series as various members of the Burns and Fairmont families. 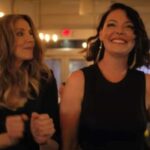 Roberts’ Belletrist Productions won the rights to Schwab’s short story — which was published in September in Imprint’s collection called “Vampires Never Get Old: Tales with Fresh Bite” — and production on the eight-episode series is currently underway.