WarnerMedia Kids & Family has released a trailer for Cartoonito’s upcoming preschool block launching this fall on HBO Max and Cartoon Network, as well as the first look at Ellen DeGeneres’ new animated show.

“Little Ellen” is a 2D animated children’s show that “explores the world through the eyes of a hilarious and unpredictable seven-year-old Ellen Degeneres,” according to its description. The series will follow a young Degeneres as she ventures into her vibrant, musical hometown of New Orleans, taking big risks, making mistakes and learning from them. In the sneak peek, which you can view above, Ellen can already be seen starting her antics as she and her friends teach a macaw bird a silly dance.

In addition to “Little Ellen,” a preview of the original CGI-animated show “Lucas the Spider,” based on a viral YouTube clip, was also released on Thursday. It follows the adventures of a young, warmhearted spider and his eclectic group of friends as they go about navigating the big world surrounding them, per the series description. In the new clip, Lucas hangs out with his fly friend as they bounce around on marshmallows together. 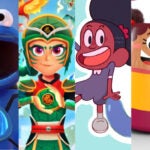 Cartoonito’s new block of shows include beloved “preschool staples” like “Sesame Street,” “Thomas & Friends: All Engines Go,” which is a reboot of “Thomas & Friends,” “Mush-Mush & the Mushables” and additional shows announced earlier this week, including “Bing,” “Dylan,” “Odo” and “Pocoyo.” Twenty original shows will also be launching, including “Little Ellen” and “Lucas the Spider,” as well as “Batwheels,” “Sesame Workshop’s Bea’s Block” and “Bugs Bunny Builders,” to name a few.

Cartoonito was announced at the WarnerMedia Kids & Family Upfront earlier this year and marks WarnerMedia’s “biggest commitment to preschool in 100 years,” offering a modern approach to preschool. Inspired by positive psychology and 21st century learning, it “aims to support every child’s humanness by celebrating their unique selves.”

And to help kids do that are four fun-shaped Cartoonito hosts: Nito, a magical box full of imagination and other characters; Glob, a shape-shifter that expresses themself through shapes rather than words; Wedge, a — you guessed it! — wedge that’s a bit fearful but very artistic and helpful; and Itty, a circle-shaped baby that’s just learning to speak. 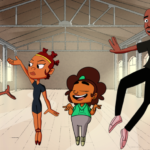 “Little Ellen” is produced by Warner Bros. Animation and Ellen Digital Ventures. “Lucas the Spider” is from Fresh TV in association with WexWorks Media, with CAKE handling international distribution.

Check out the “Little Ellen” sneak peek here and above. You can also see the full Cartoonito trailer here and the “Lucas the Spider” teaser here.