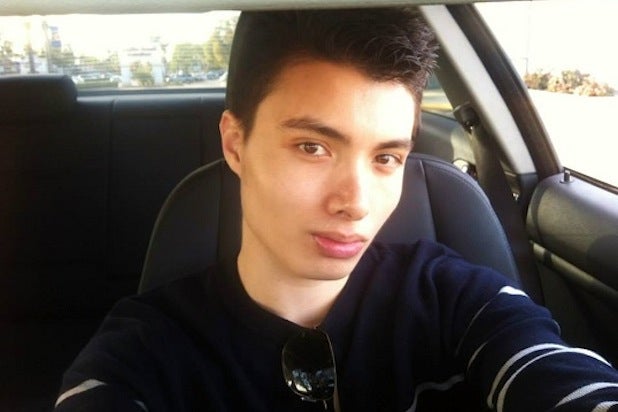 Elliot Rodger, the 22-year-old who killed six people on a shooting rampage before he killed himself this past weekend, left behind a diary that told a chilling story of privilege, emotional instability and ultimately fatal isolation in the heart of Hollywood.

In a 137-page diary obtained by media outlets, Rodger tells his life story from his own perspective as a journey from privilege to private pain and a family background deeply rooted in Hollywood – including a father who is a movie director, a mother who once dated director George Lucas and a stepmother who recently got a role in a French reality show about high-end housewives.

In his rambling, Holden Caulfield-like private musings of rage, envy and self-pity, the diary’s overarching portrait is of a young man deeply disconnected from basic human values of compassion, empathy and regard for others.

“Jealousy and envy,” he writes at one point. “Those are two feelings that would dominate my entire life and bring me immense pain.”

From his own description, Rodger was not abused or even neglected by his parents, who were long divorced. He had siblings, including a younger brother who looked up to him but who Rodger nonetheless planned to kill as part of his rampage.

He blamed his parents for not putting Rodger’s interests before their own. He was resentful that his mother declined to remarry someone wealthy so he could live in greater luxury, and angry that his father chose to risk the family finances on a documentary that was not successful.

Even so, he describes the not atypical life of a child raised in the entertainment business, with financial ups and downs but also VIP access to movie premieres like  the “Stars Wars” prequels and “The Hunger Games.” It included privileged visits to foreign countries, stints in private schools but also a life in which he proved unable to make social attachments and obsessed continually and with uncontrolled rage about his inability to experience sex with a woman.

In one of many disturbing remarks, he says: “Finding out about sex is one of the things that truly destroyed my life. Sex… the very word fills me with hate.”

The diary describes Rodger’s life from early days and concludes with his plan to extract a “Day of Retribution,” that maps closely to what he apparently did on Friday night. It is a chilling portrait of a young psychopath.

According to the diary, Rodger’s father Peter was from a distinguished British family, his mother Chin a nurse from Malaysia. The Rodger family, he said, was a prestigious, well-to-do family that fell from their social perch during the Depression. He said his grandfather, George Rodger, was a renowned photographer during World War II.

According to his manuscript, Rodger’s mother moved to England at a young age, and working as a nurse on numerous film sets, befriended such luminaries as Steven Spielberg and George Lucas, dating the latter “for a short time.”

He describes an idyllic childhood up to age five recalling “memories of happiness and bliss.” His father was becoming a professional director at the time.  He went to a private boarding school called Dorset House, where he wore a uniform.  His father decided to move the family to America to pursue his career as a director.

In the kind of minute detail that the diary describes, he writes: “When we arrived in America I was very tired.”

The family moved to Woodland Hills and although Rodger is still a young child, he begins his lifelong diatribe against girls. “Boys and girls start out the same,” he marvels, and then adds that later in life, we “face each other as enemies.”

He adds: “My six-year-old self was playing with girls, unbeknownst to the horror and misery the female gender would inflict upon me later in my life… Such bitter irony.”

The family moved to Topanga (“my first grade year ended splendidly….. “) but by age seven the family suffered financial setbacks. His parents divorced, and his mother moved to a smaller house. He was shocked when his father took up with a girlfriend who he later married, a Moroccan-born actress named Soumaya Akaaboune.

Because of his mother’s friendship with George Lucas, they were invited to the “Star Wars” premieres, which Rodger loved along with his Pokemon collection.

Age nine, he writes about being upset when his sister was allowed to bring her friends to his birthday party: “By nature I am a very jealous person, and at the age of nine my jealous nature sprung to the surface…. Jealousy and envy. Those are two feelings that would dominate my entire life and bring me immense pain.”

His desire for attention led to a decision to dye his dark hair blonde, and to take up skateboarding.

He split his time between his parents houses. But, he writes, “at mother’s house I had it my way way more often, and that’s how I wanted to live.”

That same year he traveled with his family to England on Virgin Atlantic Upper Class. “I always loved luxury and opulence.”

In middle school, Rodger discovers the Internet. He gets an Xbox and starts playing “Halo” and “Planet Cyber.”

“Finding out about sex is one of the things that truly destroyed my life,” he writes. “Sex… the very word fills me with hate.”

Then as a young teenager he discovered the online video game “World of Warcraft,” and whatever social life he had ended. “I had all the time in the world and I spent it playing ‘World of Warcraft.’ …My only social interaction would be online through video games…. I got caught up in it and I was too young and naïve to realize the severity of how far I’d fallen.”

At his mother’s house he played “World of Warcraft” up to 14 hours a day.

He was at Taft High School in Calabasas at that point, where he says he was bullied. His parents pulled him out.  In a rare moment of concern, he saved his younger brother Jazz from drowning in the family pool.

At that time his father financed a documentary about religion called “Oh My God,” which featured such famous figures as Hugh Jackman, Bob Geldof and Ringo Starr, but was a financial failure. The film, Rodger says, bankrupted the family. Meanwhile, his stepmother became a star in French reality show, “Les Vraies Housewives.”

He was a failure in high school, but his father didn’t notice his misery, he said. “How could he be so blind.. He was so caught up in his failing work that he didn’t care about how my life was turning out.” His father didn’t “show me how to attract girls.” Rodger writes obsessively about still being a virgin, watching every birthday pass without having a relationship with a girl, or a sexual experience.

He enrolled and dropped out of Pierce college. His mother told him to get a job but instead Rodger spent his days at Barnes and Noble reading books, trying to self educate, but grew enraged every time he saw couples. “Whenever I saw this I got so overcome by envy and heartbreak that I went to the bathroom to cry.”

He writes: “It was all fueled by my wish to punish everyone who is sexually active, because I concluded that it wasn’t fair that other people were able to experience sex when I’ve been denied my whole life.”

Concerned, his parents got him a life coach to try to get Rodger on track. But: “The problem was that most of the jobs that were available to me at the time were jobs I considered to be beneath me. … I am an intellectual who is destined for greatness.”

Rodger’s parents hatched a plan to send him to Santa Barbara where they hoped that once enrolled in a local college he would make friends and be less isolated.

That is not what happened. Although Rodger learned to buy better clothes and eventually was given his mother’s BMW, he descended deeper into anger and increasingly violent fantasies.

Once in Santa Barbara, he began to nurture plans of violence. He planned what he called a Day of Retribution. “I didn’t want to do it. I wanted to live,” he writes. “Thinking about the Day of Retribution made me feel trapped. I wanted a way out.  After some deep contemplation I had the revelation…. that if I could somehow become a multi-millionaire at a young age, then my life would instantly become better than most people my age…. That was a form of peaceful, happy revenge and it became my only hope.”

In the diary Rodger speaks constantly of “deserving” girls and love and sex. However he appears never to have tried to meet or talk to girls directly. Instead he talks about sitting in the courtyard of a mall in Isla Vista, waiting for girls to approach him. When they don’t, he expresses fury to his diary — and more tears.

On March 12, 2012 he went to the premiere of “Hunger Games” with his father. He met Jack Ross, director Gary Ross‘s 16-year-old son, writing: “I immediately hated him on sight.” Rodger talks about becoming infuriated with the fact that Jack was taller than him, and living a supposedly better life. Throughout the film “I had to fight the urge not to spill my drink over all the little shitheads in a vehement rage.”

Back in Santa Barbara, his musings become more delusional. “Wealth is one of the most defining factors of self-worth and superiority,” he writes. He played the lottery with the goal of winning to become rich young.  When he lost, he didn’t leave his room for a month.

His violent fantasies began to seep into the real world. He started flinging drinks at couples at coffee shops. He describes buying a Super Soaker, filling it with orange juice and sprayed it at a group of young men and women playing kickball in a field.

In a prelude to his planned rampage in the summer of 2013, Rodger got drunk at a party in Isla Vista and was angry that girls were not socializing with him and tried pushing them off a window ledge. Instead he was pushed off the ledge by partygoers, breaking an ankle, then beaten by the people at the party. “I had never been beaten and humiliated that badly,” he writes.

At that point, Gavin, a counselor hired by his parents, advised him to move out of Isla Vista. Rodger declined. They sent him to a therapist who prescribed Risperidone, an anti-psychotic drug. He refused to take it.

Instead he carefully planned the massacre, first intending to carry it out on April 24. But he woke up on that day with a cold. “It was as if fate itself was trying to stop me from doing it,” he writes.

Shortly thereafter he uploaded his confessional videos on YouTube, describing his sexual frustration, his hatred of women and making threats. A week later a knock came to his door. It was seven police officers, he said, who had been alerted to the videos by a concerned person, either his mother or a health agency.

He chillingly writes that the handguns he’d bought were in his room.  “I tactfully told them it was all a misunderstanding, and they finally left. If they had demanded to search my room… that would have ended everything.”