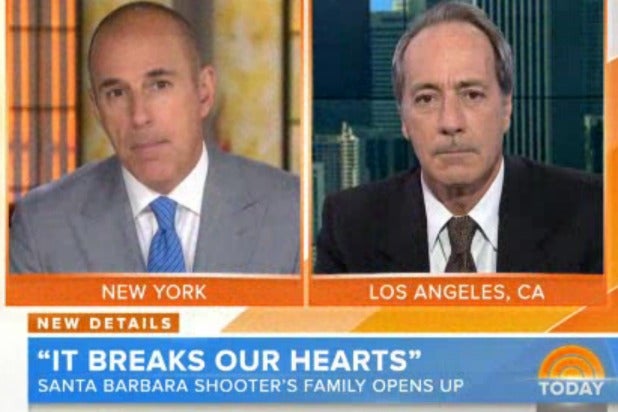 Elliot Rodger’s parents are in “hell on earth” over the murders he committed at UC Santa Barbara, and are “mourning the victims more than they are mourning their son,” a family spokesman said on “Today.”

“The feeling of knowing that it was our son’s action that caused the tragedy can only be described as hell on earth,” Simon Astaire said in a family statement, to begin his interview with Matt Lauer. “It is now our responsibility to do everything we can to help avoid this happening to any other other family. Not only to avoid any more innocence destroyed, but also to identify and deal with the mental issues that drove our son to do what he did.”

Astaire said he has seen Rodger’s parents since the shooting, and that they have not read their son’s 140-page account of his life.

“It is just awful. It’s an awful piece of writing,” Astaire said.

Rodger’s mother did read the beginning of the document when her son emailed it to her, then saw his final message on YouTube. She called Rodger’s father, and they drove to Santa Barbara to try to reach him. They heard about the murders as they drove. Elliot Rodger killed six people before shooting himself.

He had been going to therapy for years, Astaire said, and Rodger’s parents believed he might commit “violence to himself, but to others, absolutely not.”

He added that he hoped to express the parents “deep, deep remorse and grief” for the victims.