Turns out, Elon Musk at the forefront is good for business. Who knew? (OK, so Tesla knew.)

The Tesla and SpaceX frontman’s “SNL” hosting debut tied (with Adele on Oct. 24, 2020) for the third-highest episode this season with a 4.8 rating in household numbers, according to Nielsen. “Households” are the earliest available data from the TV ratings currency company.

That initial number marks a 33.3% increase over the past three original “Saturday Night Live” Season 46 episodes — March 27 hosted by Maya Rudolph, April 3 hosted by Daniel Kaluuya and April 10 hosted by Carey Mulligan — which each had a 3.6 household rating. 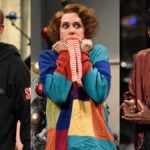 Also Read:
The Highest and Lowest-Rated ‘SNL’ Episodes of Season 46

The season-high came from the Election Week “SNL,” when Dave Chappelle emceed the show to a 5.7 household rating. The Oct. 3, 2020 Season 46 premiere, hosted by Chris Rock, got a 5.4. Those rankings remain the same in later, more stable Nielsen numbers. So far, “SNL” is enjoying its most-watched season in four years with two episodes left to air.

That 2.7 makes it the third-highest-rated episode of Season 46, outright, in the key demo. And this is a (comparatively, relatively) high-rated season. 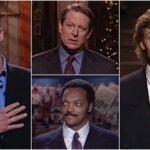 Election years are always highly rated for Lorne Michaels’ sketch-comedy staple, and 2020 was no exception. Unsurprisingly, “Saturday Night Live” is enjoying its most-watched season in four years — since the time Donald Trump actually won (vs. the time he swore he won but definitely did not). “SNL” is the highest-rated comedy on television this season among adults 18-49, according to Nielsen, counting one week of delayed viewing. (It ranks No. 2 in total viewers behind CBS’ “Young Sheldon.”)

Musk’s musical guest was Miley Cyrus, her sixth time performing that task for the show. Keegan-Michael Key and Anya Taylor-Joy will host the final two episodes of the season.