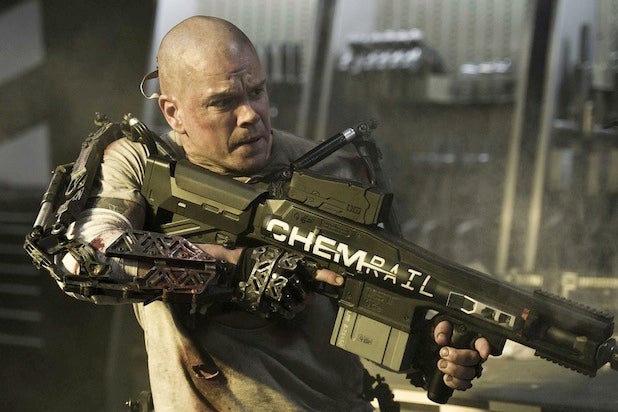 Briggs filed the lawsuit for copyright infringement on Tuesday in U.S. District Court in the Northern District of California.

A spokesperson for TriStar declined to comment on the lawsuit.

Also Read: Stephen Baldwin Gets Book He Didn’t Write Thrown at Him in Publishing Lawsuit

Briggs alleges that “Elysium” infringes on the heart of his “Butterfly Driver” story as well as its plot, characters, unusual settings, themes, conflict, catalyst, crisis, climax-twist, the hero’s unique “character-affiliation,” the hero’s “keepsake necklace” and more.

The writer claims that “Elysium” is substantially similar to his work, that the defendants had access to his work and that the parties tried to disguise their infringement.

Briggs finished the first draft of the script in May 2005 and registered a revised version with the WGA-West in Dec. 2005. In February 2007, he posted the entire script on Kevin Spacey and Dana Brunetti’s screenwriting website TriggerStreet.com, which is how Briggs claims Blomkamp had access to the script and the ideas within. He registered his script with the U.S. Copyright Office in June 2013 in order to file an infringement complaint.

There are indeed a number of similarities between the two scripts, as alleged in the lawsuit, though these types of claims are commonplace in Hollywood, particularly with regard to blockbuster studio movies. Since opening in August, “Elysium” has grossed $272 million worldwide to date.

Briggs, whose lone credit on IMDb is as the writer, director and producer of the feature film “The Amazing Mr. Excellent,” is currently a teacher’s aide at Sequoia High School in Redwood City, California.