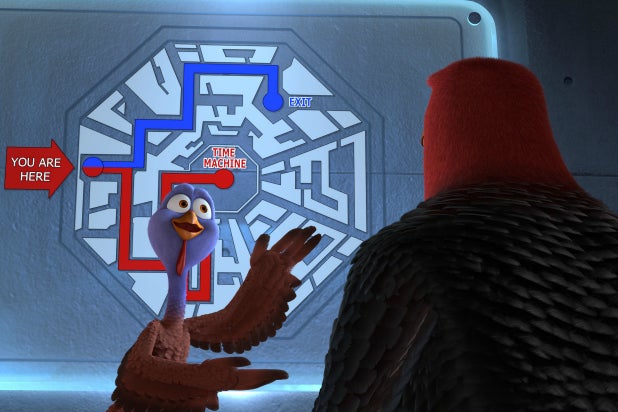 In the buffet spread of holiday movies, some are satisfying main courses and others are sweet desserts. And then there’s “Free Birds,” which is sort of like that nondescript casserole your second cousin brings that winds up at the back of the table, barely picked at and mostly ignored.

A comedy that is not funny and an adventure that is not exciting, “Free Birds” should be forgotten by the time Black Friday sales roll around.

Owen Wilson lends his distinctly nasal voice to Reggie, a turkey too smart for his own good. He figures out that he and his brethren are being fattened up (free-range style) for the kill, but his fellow gobblers are perfectly happy to eat corn and talk about corn all day. When the other fowl figure out what’s up, they happily sacrifice outsider Reggie, but it’s a stroke of luck, since he gets chosen by the president (director Jimmy Hayward, channeling Bill Clinton) to be the annual pardoned Thanksgiving turkey.

Reggie settles in for a comfy life at Camp David, having discovered pizza delivery and telenovelas, but he’s soon kidnapped by alpha turkey Jake (Woody Harrelson) for a vital mission: Together, the birds will hijack a secret government time machine (that speaks with the voice of George Takei), travel back to the first Thanksgiving and change the menu, thus saving generations of turkeys from slaughter.

Also read: Woody Harrelson on Jimmy Kimmel: I Was Hung Over at ‘Free Birds’ Premiere

Somehow, they assume control of the time machine and arrive in 17th-century colonial America, where they discover that their fore-turkeys are intelligent, brave, resourceful and in constant battle with vicious hunter Myles Standish (Colm Meaney). (“Free Birds” is otherwise forgettable, but it’s probably the only movie that will depict early settler Standish as looking like Al Swearengen from “Deadwood.”)

Reggie becomes smitten with Jenny (Amy Poehler), the daughter of Chief Broadbeak (Keith David), and attempts to destroy the colonists’ weapons, but things naturally go more than a bit awry.

Even setting aside the film’s disregard for time-travel paradoxes and genocide metaphors — trust me, you don’t want to wade into either of those — “Free Birds” just isn’t funny. For long stretches of the press screening, the young kids in attendance laughed only sporadically at the broadest gags, none of them having to do with Jake’s repeated references to his glutes.

Strangest of all, after loping along as a lame kiddie comedy, “Free Birds” suddenly goes for unearned poignance, with the death of a major character and a “Braveheart”-inspired big battle sequence at the end. It’s a 180-degree turn that even a good movie would have a tough time pulling off; here, it just feels like screenwriters Hayward and Scott Mosier, working from a story by David I. Stern and John J. Strauss, were just throwing giblets at the wall to see what would stick.

Thanksgiving deserves to have its own set of movies. But if they’re going to be at the level of “Free Birds,” it’s time to start cinematically hibernating between Halloween and Christmas.