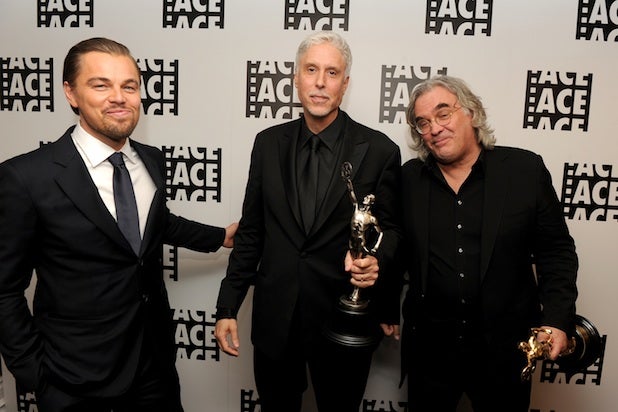 “Captain Phillips” and “American Hustle” have been named the best edited films of 2013 by the American Cinema Editors, who gave out their 64th annual ACE Eddie Awards at the Beverly Hilton Hotel on Friday night.

In the Best Edited Feature Film (Dramatic) category, which closely corresponds to both the Oscar winner for film editing and the Best Picture winner, “Captain Phillips” was a slight surprise winner over the presumed favorite, “Gravity.”

To make the night even better for “Captain Phillips,” the film’s director, Paul Greengrass, had previously been announced as recipient of the 2014 ACE Golden Eddie Filmmaker of the Year Award. He was on hand to not only accept his honorary award but to see his editor, Christopher Rouse, win the competitive prize as well – and so was the film’s star, Tom  Hanks, who presented the award to Greengrass.

(Photo at top: Greengrass and Rouse with presenter Leonardo DiCaprio.)

In the ACE Eddies’ comedy or musical category, “American Hustle” beat out a field that also included “The Wolf of Wall Street” and “Inside Llewyn Davis,” giving Sony a two-for-two night in the big film awards.

Over the last 20 years, the Oscar winner for film editing has first won the ACE Eddie 17 times. (Of that number, all but one won in the drama category.) During that two-decade stretch, an ACE Eddie winner has gone on to be named Best Picture at the Oscars 13 times.

“Frozen” won the award for best-edited animated feature, while “20 Feet From Stardom” and “The Assassination of President Kennedy” took top honors for film and TV documentaries, respectively.

In the one-hour series for commercial television category, “Breaking Bad” had four of the five nominations but somehow managed not to split the vote, with its episode “Felina” winning. The finale of another departing series, “The Office,” won for half-hour TV series.

Steven Soderbergh won the editing award for a miniseries or TV movie for “Behind the Candelabra,” though he did so under the phony name of Mary Ann Bernard, the alias he uses when he edits his own films. An assistant editor accepted the award on Soderbergh’s behalf, and read a letter in which the director dedicated the award to his mother, whose maiden name was Mary Ann Bernard and who, he said, had died on Friday morning.

An episode of “Homeland” won in the one-hour, non-commercial TV category, while the non-scripted series award went to “Anthony Bourdain: Parts Unknown.”

The American Cinema Editors is not a guild or union, but an honorary organization of several hundred film editors. It was formed in 1950, and first gave out awards the following year.