Emily Ratajkowski’s Halloween costume was no simple fur-lined bikini: She says her homage to Raquel Welch’s outfit in the 1966 film “One Million Years B.C.” was custom-made by a costumer at “Jimmy Kimmel Live” and involved hours of hair and makeup.

“I’m obsessed with reference images, and that image, that poster of her in what they called ‘mankind’s first bikini’ —  I love that. It’s just fun and kind of quirky,” Ratajkowski said.

“The costumer at Kimmel custom-made the outfit… It was very legit. And then, my hair and makeup team is very committed to the glamorous life. So they really got into it. I sat in a chair for two-and-a-half hours which I don’t normally do,” Ratajkowski said.

The costume talk starts around the 18-minute mark of our “Shoot This Now” podcast, which you can listen to on Apple or right here:

Every week on “Shoot This Now,” we talk about stories we think should be made into movies — which is just an excuse to talk about people and stories we find fascinating.

This week we talked about Maud Gonne, an Irish revolutionary, feminist and occasional inspiration to William Butler Yeats. We thought her story might appeal to Ratajkowski because, as the actress-model-activist explains on the podcast, “My Irish roots run deep.”

After we talked about Gonne, Ratajkowski mused, “Maybe I’ll be her for Halloween next year.” That led to a discussion of her costume last week.

Ratajkowski and Aaron Paul spoke with us because their new film, the thriller “Welcome Home,” is out now on DirecTV and comes to theaters Nov. 16.

As Paul told us, it follows “a couple struggling to keep things together, and then they’re put in a really scary situation in a setting where they’re not really comfortable.”

Ratajkowski signed on to the film first, in part because she was intrigued by her character, Cassie — who turns out to be more complicated than she initially seems. 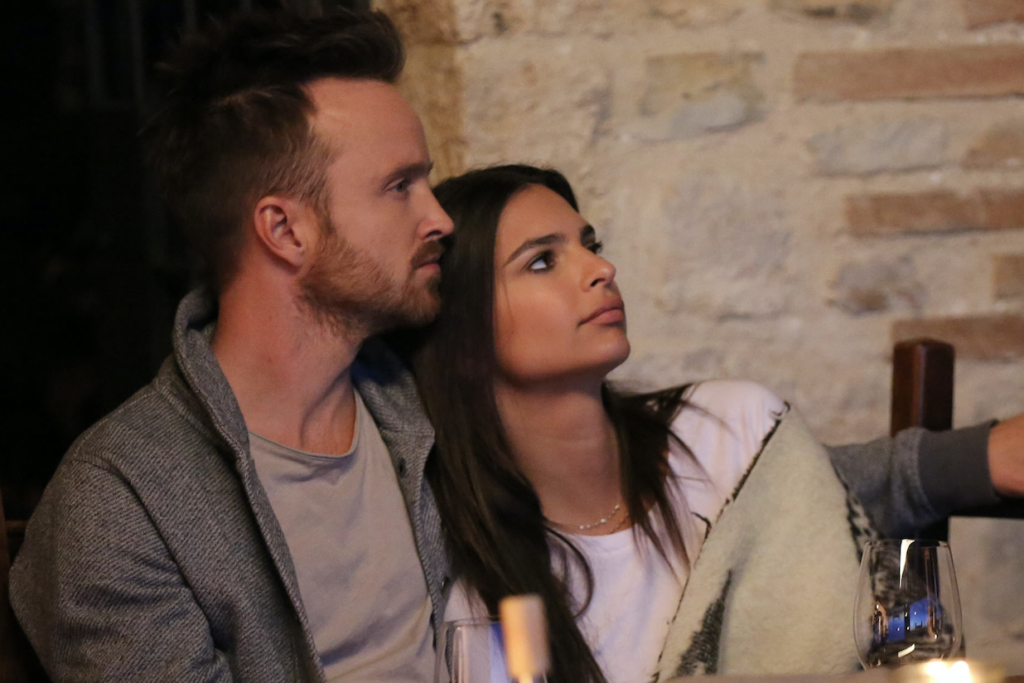 “All of the assumptions that you’ve made about her kind of get turned on their head, and she turns out to be a pretty dark, complex character, which is important,” she said.

Also: Before you race to the comments section to gripe that Ratajkowski can’t celebrate both the Raquel Welch costume and the life of a feminist revolutionary, please listen to the part of the interview where she talks about how often she has to explain that women can do more than one thing simultaneously.

“I’m sick of the question but it’s also what I’m all about — when people are like, ‘How can you be sexy and promote that, and nudity, and also be a feminist?” she said. “I can’t even believe that’s a real question, is what my answer is. … You answer it a million times and hopefully it makes an impact.”

We interviewed Ratajkowski a day after she spoke at TheWrap’s Power Women Summit, where she further explained.

“Feminism is about is a woman’s right to choose how they represent themselves, what they do with their bodies, what their life is going to be like, and I think that’s pretty much something that everyone agrees with if you are a feminist. I’ve hit a lot of roadblocks within feminist communities, like what happened in a second wave where people asked, ‘Do we accept pornography? Can a woman be a prostitute and a feminist?’ My answer is: Absolutely, as long as it’s her choice!” she said.

She added: “If she’s feeling herself in a lacy thong, good for her. As a young woman, I had so many people telling me what to do with my body, making me feel embarrassed, and it was really unfortunately that some of those people were women who were trying to protect me but were at the same time actually limiting me and making me feel ashamed of my body… It’s very important to me whether you choose to cover yourself completely or be naked all the time, that it’s your choice. If you are a woman, if you are making a decision, I respect that.”

Raquel Welch’s bikini from “One Million Years B.C.” has a storied place in film history: It became one of the most popular pin-up images of all time, and in 2011 Time Magazine named it one of the “Top 10 Bikinis in Pop Culture.”

It even has its own Wikipedia page: “Fur bikini of Raquel Welch.”