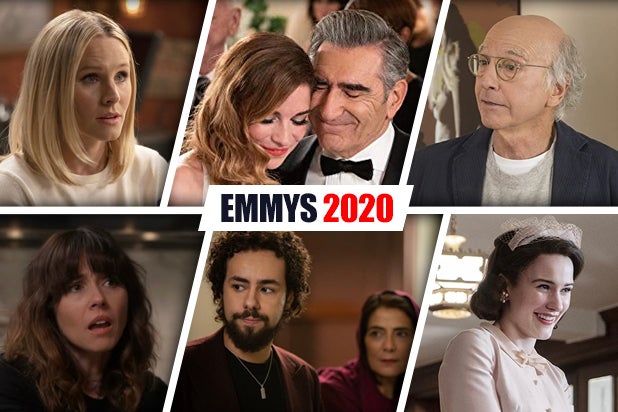 Clockwise from top left: 'The Good Place,' 'Schitt's Creek,' 'Curb Your Enthusiasm,' 'The Marvelous Mrs. Maisel,' 'Ramy,' 'Dead to Me'

Emmy voters have a chance to give golden parting gifts to those final-year shows, along with five-time winner ”Modern Family“

The Emmys’ comedy categories this year have a lot to do with endings and beginnings — with “Veep” and “Fleabag” no longer in the running, with “Schitt’s Creek,” “The Good Place” and “Modern Family” airing final seasons and with everything from “The Great” to “Zoey’s Extraordinary Playlist” to “Space Force” trying to crash the party.

Will “Schitt’s Creek” finally get the Emmy attention that has eluded it for years? Will “Modern Family” get a fond farewell, or a brusque brushoff? Will anybody in the comedy arena pull a Phoebe Waller-Bridge and walk away with this year’s show? Stay tuned.

Of last year’s seven nominees in this category, four are gone: “Fleabag” and “Veep” are off the air, while “Barry” and “Russian Doll” didn’t air new seasons during the eligibility period. That leaves 2018 winner “The Marvelous Mrs. Maisel,” which is certainly one of this year’s top contenders, and the celebrated final seasons of “Schitt’s Creek” and “The Good Place,” which will likely get a nice sendoff from voters. Other contending shows that have been nominated in the past include “Curb Your Enthusiasm,” “black-ish,” “Silicon Valley,” “Modern Family” and “GLOW” – and those are listed roughly in order of likelihood unless a surge of affection for five-time winner “Modern Family” gives it a boost. (Typically, the Television Academy isn’t particularly sentimental.)

Of the shows hoping to break into the category for the first time, “Ramy,” “Dead to Me” and “Insecure” have all picked up momentum recently, as have “Zoey’s Extraordinary Playlist” and the long shot “The Great.” Pamela Adlon’s “Better Things” is due, and this could be the year for it. But HBO didn’t help “Run” (produced by Waller-Bridge) by canceling it during the voting period, and “Space Force” didn’t really get the kind of buzz that Netflix was hoping for.

Also Read: 'Insecure' Creator Issa Rae on Comedy in a Time of Crisis: 'We Are More Than Our Trauma'

LEAD ACTRESS IN A COMEDY SERIES
Number of submissions: 88
Number of nominees: 6

Christina Applegate (“Dead to Me”), Rachel Brosnahan (“The Marvelous Mrs. Maisel”) and Catherine O’Hara (“Schitt’s Creek”) are the only returning nominees in the running, and they’re all in good shape. Tracee Ellis Ross (“black-ish”), Issa Rae (“Insecure”), Allison Janney (“Mom”), Pamela Adlon (“Better Things”) and Jane Fonda and Lily Tomlin (“Grace and Frankie”) have landed nominations in the past and would like to do it again, though the return might be easier for Rae and Adlon than for the others.

Among the actresses looking to break in, Linda Cardellini may be in the best position with her co-lead performance in “Dead to Me.” But you can’t rule out some dark-horse candidates who could pull off an upset, including Jane Levy for “Zoey’s Extraordinary Playlist,” Elle Fanning for “The Great,” Kristen Bell for “The Good Place” and Robin Thede for “A Black Lady Sketch Show.”

Also Read: What 'Dead to Me' Taught Linda Cardellini About Grief: 'No Matter How Much You Love, You Will Lose'

LEAD ACTOR IN A COMEDY SERIES
Number of submissions: 86
Number of nominees: 6

Ted Danson has more nominations in this category than any actor in history, though only three of his 13 have been for “The Good Place.” Anthony Anderson is riding a streak of five consecutive noms for “black-ish.” Larry David has six acting nominations in the nine previous seasons of “Curb Your Enthusiasm.” Michael Douglas and Eugene Levy each have single nominations for their current shows, “The Kominsky Method” and “Schitt’s Creek,” but they are beloved. All five were nominated in the category last year, and all five likely will be this year as well.

As for who will join them, the top choices include Ramy Youssef, who has won widespread praise for the second season of his show “Ramy,” and Don Cheadle, whose nomination last year for “Black Money” was his fifth overall. Other contenders include Zach Galifianakis for the final season of “Baskets,” Steve Carell for “Space Force,” Ben Platt for “The Politician,” Domhnall Gleeson for “Run” and Dave Burd for “Dave.”

SUPPORTING ACTRESS IN A COMEDY SERIES
Number of submissions: 251
Number of nominees: 8

Only once in the last 12 years has “Saturday Night Live” not placed a nominee in this category, and in two of the last three years the show snagged three noms. That makes Kate McKinnon pretty much a sure thing to receive her seventh nod – though if one show hogs the category this year, it’s likelier to be “The Marvelous Mrs. Maisel,” which can offer Jane Lynch, Marin Hinkle and back-to-back winner Alex Borstein.

Annie Murphy, meanwhile, came into her own in the final season of “Schitt’s Creek,” while Yvonne Orji was at the center of the most touching storyline of the season on “Insecure” and D’Arcy Carden found abundant humanity in the inhuman Janet in “The Good Place.” (Her four seasons of scene-stealing will probably give her a slight edge over castmate Jameela Jamil.) And Betty Gilpin remains the surest bet for “GLOW” in the major categories, though she or Carden could easily be challenged by Rita Moreno (“One Day at a Time”), Gillian Anderson (“Sex Education”), Megan Mullally (“Will & Grace”) or Hiam Abbass (“Ramy”).

Also Read: D'Arcy Carden Hates to Say Goodbye to Janet in 'The Good Place': 'I Miss Her Forever'

SUPPORTING ACTOR IN A COMEDY SERIES
Number of submissions: 241
Number of nominees: 8

This field turned out to be wide open: Not only has the category expanded to eight nominees, but four of last year’s six nominees came from “Barry” and “Veep” and aren’t eligible this year. That leaves Tony Shalhoub (“The Marvelous Mrs. Maisel”) and Alan Arkin (“The Kominsky Method”) to represent the class of 2019, which they should do quite easily, but it also opens up six new slots.

The contenders for those slots do include a few guys who’ve been here before: Louie Anderson was nominated three times and won once for “Baskets”; Alec Baldwin was nominated twice and won once for playing Donald Trump on “Saturday Night Live”; Kenan Thompson was nominated once for “SNL”; Andre Braugher has a three-year streak of noms between 2014 and 2016 for “Brooklyn Nine-Nine”; and Ty Burrell was landing nominations after everybody else on “Modern Family” had stopped getting them, though his last was in 2017. But Anderson feels like the best bet among that group, and voters won’t be able to ignore two-time Oscar winner Mahershala Ali for his turn on “Ramy,” or Dan Levy for both acting in and showrunning “Schitt’s Creek,” or Sterling K. Brown for jumping from his day job in drama, “This Is Us,” to doing comedy on “Mrs. Maisel,” which has become a magnet for acting nominations. And don’t forget Peter Gallagher for his near-wordless role on “Zoey’s Extraordinary Playlist,” or John Malkovich stealing scenes on “Space Force” and providing a bright spot even for viewers who don’t like the show, or Nicholas Hoult’s riotously funny performance in “The Great.”

Read our other predictions in the drama, limited series and variety and reality categories.