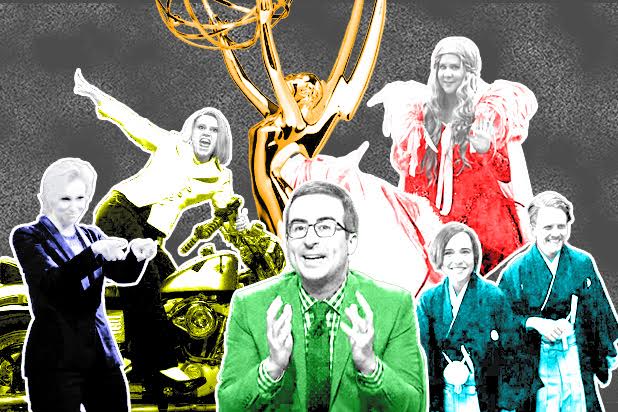 For years, the Emmy variety and reality categories have given us the dullest, most predictable races imaginable. This year, half of that has changed.

In the variety categories, David Letterman won five consecutive awards between 1998 and 2002, and then Jon Stewart won 10 in a row, and then Stephen Colbert won two in a row. But Letterman has now retired, Colbert left “The Colbert Report” to take over Letterman’s “Late Show” franchise and Stewart departed “The Daily Show.”

So now, unless Colbert wins for his new gig (unlikely at best), the variety-talk Emmy will go to a relative newcomer like Jimmy Fallon or Jimmy Kimmel, or an even fresher face like James Corden, Samantha Bee, John Oliver, Trevor Noah or Seth Meyers.

On the reality side, meanwhile, “The Amazing Race” won 10 times in 13 years, often against the same competition. But if you’re looking for a shakeup on that front, forget it: When it comes to reality television, the 68th Primetime Emmy Awards will likely provide a whole lot of been-there, done-that.

This is the fourth and last of TheWrap’s Emmy predictions, which have already covered the drama, comedy and movie/miniseries categories.

Together, we’ve now predicted the nominees in 22 Emmy categories. That only leaves 91 categories to go – but for those, you’re on your own.

The late-night shakeup has resulted in the most interesting new Emmy race, particularly since Colbert is struggling to find his voice on the “Late Show” and Noah is doing the same on “The Daily Show.”

That could open the door for Jimmy Fallon, who has made late-night goofy and viral, or James Corden, whose carpool karaoke is about as buzzy as the genre gets, or Samantha Bee and John Oliver, the sharpest voices in the post-Stewart era of political comedy. But don’t underestimate old vet Bill Maher, an ideal tour guide to the insane political landscape of 2016.

It’s probably foolhardy to predict that Maher and Bee will both get in and Colbert won’t, but that’s what we’re doing.

Also Read: Stephen Colbert: 5 Reasons His 'Late Show' is Tanking in the Ratings

The other variety series category isn’t as unsettled, but it features an intriguing mixture of the old guard (“Saturday Night Live,” the most honored show in Emmy history), the new breed (“Inside Amy Schumer,” the final season of “Key & Peele”) and the even newer breed (“Billy on the Street,” “Drunk History”).

“SNL,” “Amy Schumer” and “Key & Peele” are clear favorites and “Drunk History” should repeat its 2015 nomination. We think Fred Armisen will figure in the other two slots with “Portlandia,” a past Emmy fave, and “Documentary Now,” an ambitious spoof series that launched a serious Emmy push this year.

OUTSTANDING REALITY-COMPETITION PROGRAM
Predictions:
“The Amazing Race”
“Dancing With the Stars”
“Hollywood Game Night”
“So You Think You Can Dance”
“Top Chef”
“The Voice”

The marquee reality category is also the most boring category in the history of the Emmys. For four straight years between 2007 and 2010, the same five shows were nominated: “The Amazing Race,” “American Idol,” “Dancing With the Stars,” “Project Runway” and “Top Chef.” Then the category expanded to six nominees and added “So You Think You Can Dance,” and then “Survivor” dropped out and “The Voice” came in.

What stands in the way of another snoozeworthy reality-competition competition? For old times’ sake, voters could go for the last season of “American Idol.” If they want something marginally fresher, there’s Jane Lynch‘s low-tech “Hollywood Game Night.” Here’s guessing they’ve moved on from “Idol” but are ready to let “Game Night” into this exclusive club.

In the two years of this category’s existence, “Antiques Roadshow,” “Diners, Drive-Ins and Dives,” “Mythbusters,” “Shark Tank” and “Undercover Boss” have been nominated each year, and there’s little reason to think they won’t be again. “Property Brothers” grabbed the last nomination in 2015, but the more socially conscious “The Profit” could take that spot this year.

“Deadliest Catch,” “Alaska: The Last Frontier,” “Million Dollar Listing New York” and “Wahlburgers” are two-time nominees in a category that has only existed for two years, and “Intervention” is a one-time nominee and a serious program for serious times. “I Am Cait” is certainly the splashiest contender to debut lately — but while voters might well want to recognize LGBT issues, the sideshow surrounding Catlin Jenner may well steer them in a safer direction, and toward “Gaycation With Ellen Page.”

This is another boring category, with the same names popping up year after year: Bergeron, Deely, Klum and Gunn, Lynch, Anthony Bourdain, etc. The only real questions are whether Ryan Seacrest, who hasn’t been nominated since 2013, will be back for the final season of “Idol”; whether “Survivor” host Jeff Probst can end his four-year shutout, which followed a four-year winning streak; whether “The Amazing Race” host Phil Keoghan can end his own three-year drought; and whether Carson Daly, LL Cool J or Steve Harvey can bring some new blood to the category.