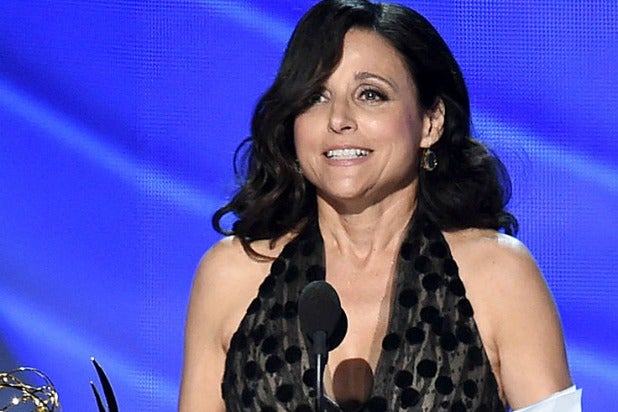 Emmy voters love lots of shows, but they don’t love any of them all the way.

They love “Game of Thrones” enough to give it the award for Outstanding Drama Series for the second consecutive year, but not enough to give acting awards to Kit Harington, Peter Dinklage, Lena Headey, Emilia Clarke or Maisie Williams, even though Harington and Headey were considered pre-show favorites.

They love “Veep” and Julia Louis-Dreyfus, but not enough to give awards to Tony Hale or Matt Walsh or Anna Chlumsky or the show’s writers and directors, who landed five nominations but no wins.

They love “The People v. O.J. Simpson” most of all, giving it five awards in the six categories in which it was nominated – but even though it had half the nominations for movie/miniseries directing, they opted for “The Night Manager” in that category instead.

But that’s the way the Emmys go: Instead of sweeps, they seem to pick awards independently of each other, spreading the wealth and making it impossible to figure out exactly where they’re going.

And that’s good. At their worst, when they seem to pick the same winners year after year, the Emmys can be the most predictable and dullest awards show in the business. At their best, when Television Academy voters appear to be trying to honestly take stock of the vast and diverse world of television, they can be one of the freshest and least predictable.

This year, they veered toward the latter. And on the hot-button diversity issue, they left most other awards shows in the dust. Sunday’s winners included African-Americans (King, Sterling K. Brown, Courtney B. Vance), an Egyptian American (Malik) and an Indian American (Aziz Ansari). And the first two awards to male actors were a demonstration of gender diversity, going to Louie Anderson, who plays Zach Galifianakis‘ mother on “Baskets” without ever winking at the camera, and Jeffrey Tambor on “Transparent,” where he plays a transgender woman.

Certainly, Sunday night’s show had its no-brainer awards: Sarah Paulson and Courtney B. Vance for “People v. O.J.,” Tambor for “Transparent,” Louis-Dreyfus for “Veep.” But it also had its surprises, which outnumbered the locks: Bier over the “O.J.” directors, Ben Mendelssohn for “Bloodline” over Harington and Dinklage and Jonathan Banks for “Better Call Saul,” Kate McKinnon for “Saturday Night Live” over Allison Janney for “Mom” and Chlumsky for Veep,” Regina King for “American Crime” over Jean Smart for “Fargo,” and Tatiana Maslany for “Orphan Black” over Robin Wright for “House of Cards” and Viola Davis for “How to Get Away With Murder.”

The two big series winners were “Game of Thrones” and “Veep,” the pre-show favorites — but the series acting wins went to a batch of shows that are either new or hadn’t landed on Emmy radar until recently: “Mr. Robot,” “Orphan Black,” “Bloodline,” “Baskets” and “Transparent,” along with the old standbys “Veep,” “Downton Abbey” and “Saturday Night Live” (which had never before won a supporting actor or actress award, despite 41 years on the air and lots of guest-acting honors).

That makes it seem as if the Emmys are in a genuine changing of the guard. Sure, they’ll give “Downton Abbey” a nice parting gift in the form of yet another Emmy for Maggie Smith, and they’ll toss a record-setting fifth consecutive actress trophy to the undeniable Louis-Dreyfus, but in the margins they’re doing lots of more adventurous things.

Part of the change may be due to the change in Emmy voting instituted this year. In the past, voters in many categories were asked to rank the nominees in order of preference, which produces a consensus winner. This year, they simply voted for their favorite of the nominees, which allows for smaller but passionate groups of fans to sway the vote.

That mixed things up, provided a few surprises and continued a recent trend toward just enough fresh thinking to make us think that these voters are actually trying to take stock of a vast, diverse television landscape.

Emmys: What You Didn't See on TV (Photos)

Tightened security, no booze at the bar and late arrivals were just the beginning of what our reporter saw at Sunday’s ceremony when cameras weren’t around

3:25 p.m.
Security is much tighter around the ceremony. Police are opening trunks and searching all cars, even civilians dropped off in the parking garage without any red carpet access.