A year after “Schitt’s Creek” made history by sweeping all the comedy prizes at the Emmy Awards, “The Crown” just accomplished the same feat, this time in drama.

After four years, the Netflix drama finally clinched the trophy for Outstanding Drama Series at the 2021 Emmys, giving the show the clean sweep of all seven drama categories — a first in the history of the Emmys.

Early victories came in the writing and directing fields, with series creator Peter Morgan and director Jessica Hobbs taking home wins for the fourth season episode, “War.” They were followed later in the night by Gillian Anderson and Tobias Menzies, (who portrayed Margaret Thatcher and Prince Philip, respectively) in the supporting actor categories and stars Josh O’Connor and Olivia Colman for lead actor and actress. 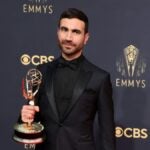 The closest any drama has come to sweeping in the past was “Hill Street Blues” in 1981. The cop drama picked up six awards, including Outstanding Drama Series and lead acting prizes for stars Daniel J. Travanti and Barbara Babcock. The only category the show missed out on was supporting actress, with Barbara Bosson and Betty Thomas both losing out to “Lou Grant” star Nancy Marchand.

The dramatized account of British royal family history returned for its fourth season back in November, depicting the period between 1979 and 1990 and the introduction of Lady Diana Spencer, played by Emma Corrin. Colman returned for her second season as Queen Elizabeth II after taking over for original star Claire Foy last year. (Both Colman and Emma Corrin were nominated in the lead actress category.)

Foy managed to snag her own Emmy this year, taking home the guest actress prize at the Creative Arts Emmys ceremony last weekend. Hers was among four trophies awarded to “The Crown” at the two-night ceremony, alongside awards for cinematography, casting and editing.