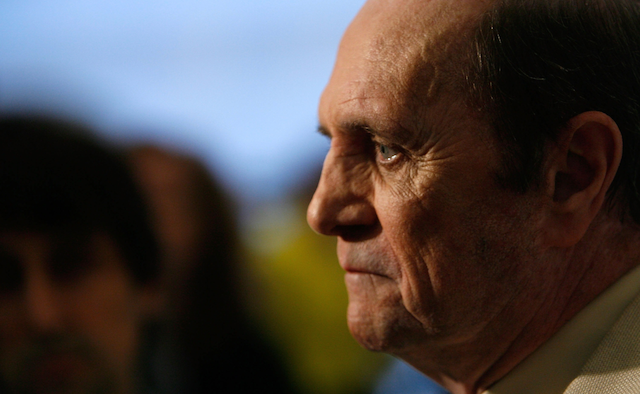 (This article first appeared in the EmmyWrap, "Down to the Wire.")

Bob Newhart has been appearing on television for more than half a century.

He won a Peabody Award after the first year of his first show. He guest-hosted Johnny Carson’s “Tonight Show” 87 times and “Saturday Night Live” twice. He is number 17 on TV Guide’s list of the greatest television stars of all time. He has a star on the Hollywood Walk of Fame and a statue on Chicago’s Magnificent Mile. He’s been awarded the Kennedy Center’s Mark Twain Prize for American humor. And he’s been inducted into the TV Academy’s Television Hall of Fame.

His first show, a variety program that lasted for one year, won in the Outstanding Program Achievement in the Field of Humor category — but that went to the show’s producer, not to Newhart.

And Newhart himself has only been nominated six times — once for writing, in 1962, and the other five times for acting, on shows ranging from his sitcom “Newhart” to the drama “ER,” the TNT movie “The Librarian: Curse of the Judas Chalice” and, this year, the CBS series “The Big Bang Theory.”

TheWrap got the TV and comedy icon on the phone, which was appropriate since his signature comedy bit is a one-sided phone conversation. He gave us a guided tour through a brilliant career that’s been rather mystifyingly overlooked by Emmy voters.

In brief: Hot on the heels “The Button-Down Mind of Bob Newhart,” a comedy album that hit No. 1 on the Billboard charts, Newhart was lured to television by NBC, for whom he hosted a variety show.
Emmy nomination: Outstanding Writing Achievement in Comedy, 1962
Lost to: Carl Reiner, “The Dick Van Dyke Show” “I made a record album in 1960 and it exploded, and I got all these offers for TV. But I have mixed emotions about that show. The format was a monologue, than a guest star, then a sketch. I was fine in the monologue, but I wasn't very good in the sketches, and I knew I wasn’t. I wasn't used to working with other actors, and I wasn't in control. It was a learning experience — and unfortunately, it was a learning experience in front of millions of Americans.

“The show got an Emmy and a Peabody and a pink slip from NBC, all in the same year.”

In brief: Newhart played a psychiatrist and Suzanne Pleshette played his wife in a classic sitcom that ran for six seasons.
Emmy nominations: None for Newhart, four for the show (no wins)

“Between ’61 and ’72 I’d learned a lot of things. I think I might have subconsciously decided to watch shows and learn how to do it better.

“I’ve thought a lot about how that show never won an Emmy, and I think we kind of lived in the shadow of “The Mary Tyler Moore Show,” which was such a powerful show. We lived in their shadow, and our show didn’t get the recognition it deserved until it went into syndication and we weren’t behind Mary anymore.

“I just got so tired of being passed over personally that I just didn’t submit myself anymore, so I wouldn’t have to go through the agony of defeat, or whatever you want to call it. Being a standup comic, I’m used to thinking, ‘It’s just Bob being Bob. You don’t give an award to Bob for being Bob.’ So there was no bitterness or anything. But because I didn't submit myself, I could say, ‘Well, I would have won if I put my name in.'”

In brief: Newhart’s second sitcom ran for eight seasons beginning in 1982, and found him playing the innkeeper in a small Vermont inn-surrounded, as usual, by a cast of oddballs.
Emmy nominations: Outstanding Lead Actor in a Comedy Series, 1985, 1986, 1987
Lost to: Robert Guillaume, “Benson“; Michael J. Fox, “Family Ties“ (twice)

“We had discussed the idea of maybe coming back with “The Bob Newhart Show“ and just picking up four years later, but Suzie [Pleshette] was involved in a play in New York, and we realized that we’d used up an awful lot of plot in those first six seasons. So we decided to come back with a totally different show. I talked to [writer-producer] Barry Kemp about it, and when he sent me the pilot episode I circled it for about three days. I was afraid to read it, thinking, ‘What if this isn’t as good?’ “The ending [in which Bob wakes up in bed next to Pleshette and realizes the entire eight seasons of “Newhart“ had been a dream] was my wife’s idea. She came up with it because there was so much incongruity in the show: The maid was an heiress, Tom Poston never understood anything I said, and we had Larry, Darryl and Darryl, who were straight out of “Deliverance,” and what they were doing in Vermont was never explained.

"There were so many inexplicable things in that show that I thought it was a great idea. And it did get quite a bit of recognition.”

In brief: In John Wells‘ long-running, Emmy-winning drama, Newhart played a suicidal man who was going blind, and knew that he would no longer be able to make his living building architectural models. The three-show arc ended with his character’s suicide.
Emmy nomination: Outstanding Guest Actor in a Drama Series, 2004
Lost to: William Shatner, “The Practice”

“John Wells sent me the script, and he and I had a conversation. I said, ‘John, there’s nothing in my background to suggest I can do this.’ He said, ‘We think you’re a good actor, and you can pull it off.’ I don’t think there’s a Hamlet in every comic, but I did it and got an Emmy nomination.

“I was never trained as a serious actor, but I understood the frustration of someone with macular degeneration, who knows what his life is going to be like. I thought, ‘How does this relate to you? What if you lost your ability to talk, for some reason?'”

“THE LIBRARIAN: CURSE OF THE JUDAS CHALICE"
2008

In brief: Newhart played a former librarian who guarded many of the world’s biggest secrets in three “Indiana Jones”-style TV movies for TNT; Noah Wyle starred.
Emmy nomination: Outstanding Supporting Actor in a Miniseries or a Movie, 2009
Lost to: Ken Howard, "Grey Gardens" “It was written on a wonderful level where it wasn’t a question of brute strength or incredible powers. It was just was able to use his intelligence to get himself out of situations. And I thought that was a wonderful message.

“But the nomination surprised me. I didn’t think I was doing anything really hard. Thank God the Academy didn't feel that way.”

In brief: In this season’s episode “The Proton Resurgence,” Newhart appears as a TV scientist who’s been reduced to playing birthday parties because the scientific community won’t take him seriously.
Emmy nomination: Outstanding Guest Actor in a Comedy Series, 2013

“He said, ‘OK, you got it,’ and then he wrote this script that just played to my strengths. I just treated Jim Parsons and Johnny Galecki and Kaley Cuoco like they were Larry, Darryl and Darryl.

“We shot it at Warner Bros., and I shot my other two shows at Radford, but physically it was almost like being back on Stage 17. The audience was just that far away from you. It was surreal. It as like going back to ’72, like nothing had changed.”