In a strange, unpredictable Emmy show filled with unexpected choices and curious musical numbers, voters threw a real scare into the two shows that ended up winning the biggest awards of the night, “Breaking Bad” and “Modern Family.”

Overall, the awards were so scattershot, with no show establishing momentum and a number of extreme dark horses winning, that host Neil Patrick Harris joked midway through: “Nobody is winning their office Emmy pool.”

In fact, both big winners went into the final category with reason to think that Sunday might not be their night, with losses in previous categories making their predicted victories far from a sure thing.

But at the end of the night at the 65th Emmy Awards, those two shows emerged victorious, with wins that must have been a relief for ABC’s “Modern Family,” which had its winning streak on the line, and a sweet reward for AMC’s “Breaking Bad,” which had been nominated three previous times without winning.

Adding a touch of gold to a triumphant month for Vince Gilligan’s show about the downward spiral of a murderous meth-cooking former high-school teacher, voters named “Breaking Bad” the year’s best drama on the same night that the series’ second-to-last episode aired on AMC.

The Emmy was given for the eight “BB” episodes that ran last summer and fall; the current string of shows, which have won record-breaking ratings and widespread acclaim for the series, will be eligible for Emmys next year.

Voters had sent mixed messages to Gilligan and his show right up until the final award of the night: Co-star Anna Gunn won the supporting-actress-in-a-drama award early on, but lead-actor nominee Bryan Cranston and supporting-actor nominees Aaron Paul and Jonathan Banks were upset by Jeff Daniels from “The Newsroom” and Bobby Cannavale from “Boardwalk Empire,” respectively.

Claire Danes won the final drama acting award for the second year in a row for “Homeland,” preventing Kerry Washington (“Scandal”) from becoming the first African-American to win in the category. 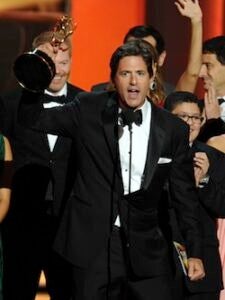 On the comedy side, “Modern Family” had good reason to believe that its three-year Emmy run might be coming to an end.

Although the show had won five of the six awards given out in the supporting actor and actress in a comedy series categories during the time it has been on the air, its five nominees – Julie Bowen and Sofia Vergara in the supporting actress category, Ed O’Neill, Ty Burrell and Jesse Tyler Ferguson in supporting actor – lost to Merritt Wever from “Nurse Jackie” and Tony Hale from “Veep.”

But typical of a night in which the voters never missed an opportunity to be confusing, the lead comedy categories were as predictable as the supporting categories were unexpected. Julia Louis-Dreyfuss, who was already the first actress to win acting awards for three different shows, made “Veep” the first show for which she’s won twice, while Jim Parsons’ win for “The Big Bang Theory” was his third in four years for the role.

And when it came time for the Outstanding Comedy Series award, the Emmys once again went back to “Modern Family,” which has now won the award four consecutive years — which is to say, every year that it has been on the air.

“Modern Family” is now second only to “Frasier,” which won five consecutive awards; no other show has won four consecutive years, although “The Dick Van Dyke Show,” “All in the Family” and “Cheers” have won four with interruptions.

In both the drama and comedy fields went into the final award with no show holding any momentum: In both areas, the six previous awards had gone to five different shows.

Overall, 19 different programs won the 26 awards, with no show winning more than three awards and 13 of them winning only a single Emmy. 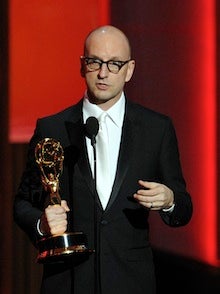 In the movie or miniseries categories, it was a foregone conclusion that Steven Soderbergh‘s “Behind the Candelabra” would dominate, just as it had the previous weekend on the Creative Arts Emmys.

In fact, “Candelabra”-love was so all-pervasive that Elton John was given a slot on the show to perform a song from his new album, justifying its presence by saying it reminded him of Liberace, the subject of the HBO movie.

(If Elton says another song on the album reminds him of Solomon Northrup, will he get a slot on the Oscars and a “12 Years a Slave” tie-in? Just asking … )

“Candelabra” ended up with three awards to go with the eight it won at the Creative Arts Emmys last weekend, with Soderbergh (at right) winning for directing, Michael Douglas being named best actor and the movie itself taking home the Outstanding Miniseries or Movie award.

But it lost the writing award to the canceled BBC America show “The Hour,” and James Cromwell (“American Horror Story: Asylum”) took the supporting actor in a miniseries or movie category over Scott Bakula. Those two losses prevented “Candelabra” from passing the 11 awards won by 1976’s “Eleanor in Franklin,” with which it is now tied for the most TV-movie Emmys.

The move from the drama series to movie/miniseries category helped out Laura Linney, who ended the four-year run of “The Big C” with an Emmy for its final, abbreviated season. It was her fourth win in five nominations, with her only loss coming for “The Big C” when it was in the drama-series category.

And it was a night when the two most dominant shows in Emmy history both lost. “The Voice” beat “The Amazing Race” for Outstanding Reality-Competition Program after “TAR” had won nine times in the category’s 10-year existence, while “The Colbert Report” finally broke the historic 10-year streak of “The Daily Show With Jon Stewart” in the Outstanding Variety Series category.

But another streak remained intact: Bill Maher, who went into the night as the Emmys’ biggest loser at 0-for-30, was nominated in two more categories and lost to “Colbert” in both. “Saturday Night Live,” meanwhile, passed “Frasier” last week to set a new record as the most-awarded series, and increased its tally by one with a win for variety directing on Sunday; it now has 40 Emmys overall, the most of any series ever.

Late in the three-hour-plus show, just as the Emmys seemed ready to go over the cliff into completely random unpredictability, voters reversed course and ended the night with a string of expected winners: “Breaking Bad,” “Modern Family,” “Behind the Candelabra,” Michael Douglas … Still, it remained a confounding, perplexing Emmys.

To repeat: What was that?