Emmy voters endorsed “Breaking Bad” and “Modern Family” at the 65th Emmy Awards on Sunday for the evening’s top prizes, but spread out the laurels among a wide range of shows.

Riding a wave of popular and critical support, “Breaking Bad’ scored its first victory as Best Drama Series and a supporting actress prize for Anna Gunn, even as stars Jonathan Banks, Bryan Cranston and Aaron Paul were shut out by unexpected winners. 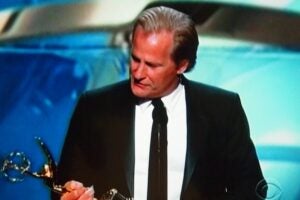 “I did not see this coming,” “Breaking Bad’ creator Vince Gilligan said, noting that the competition for the prize from shows like “Homeland” and “Mad Men” was tough in what he christened a “golden age” of television

If Gilligan was filled with disbelief, the team behind “Modern Family” shouldn’t have been. The humorous multi-generational series picked up its fourth Best Comedy prize in as many years.

In his acceptance speech, producer Steve Levitan thanked the bullies and gym teachers who harassed the award-winning cast into a career in comedy.

“Modern Family”s’ victory may have seemed pre-ordained, but it was an evening heavy with upsets. Perhaps the biggest surprise in a night that overflowed with them and left most Emmy tea-leaf readers flummoxed was Jeff Daniels‘ win for his role as a cocky news anchor on HBO’s “The Newsroom.”

“Well crap … I usually don’t win anything,” Daniels said, joking that he last won the best actor over 50 from the AARP for “The Squid and the Whale.” The show had been largely shut out in the nominations, and “Breaking Bad”s’ Bryan Cranston and “Homeland”s’ Damian Lewis were both viewed as stronger contenders, especially with “Breaking Bad” in its final season.

Also defying the odds, “The Colbert Report” broke the longest winning streak in Emmy history, beating “The Daily Show With Jon Stewart,” which dominated the Best Variety Series competition for the past decade.

“I was going to say it’s an honor just to be nominated, but it’s more than that, it’s also a lie,” Colbert joked, before thanking Stewart for convincing him to create his own faux news show. 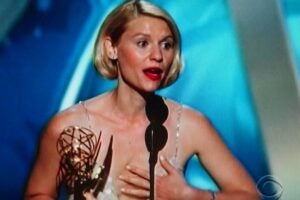 Meanwhile, “The Voice” did what “American Idol” has never done before: walked away with the Outstanding Reality-Competition Series prize. The musical competition show beat out frequent victor “The Amazing Race” and past winner “Top Chef” to claim the prize.

And while going into the big show, Netflix dominated headlines with its much lauded original shows “Arrested Development” and “House of Cards,” it was largely shut out of the major categories.

The only big prize the new media giant scored was a Best Director win for David Fincher’s behind the camera work on the pilot episode of “House of Cards.”

Not all of Emmy voters’ choices were outside the box. Many Emmy watchers had hoped that Kerry Washington would make history by becoming the first African-American to win Best Actress in a Drama Series for her role as a savvy power player in “Scandal.” Instead, Claire Danes scored her second statue for playing a mentally unbalanced CIA analyst in “Homeland.”

Danes thanked her husband Hugh Dancy “for making me so whole and so happy so I can be so entirely unhappy in the land of make believe.” 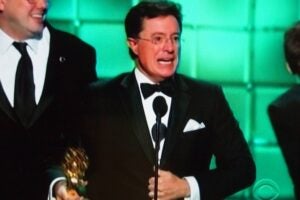 Also sticking with the tried and true, Julia Louis-Dreyfus won her fourth Emmy award on Sunday, picking up Best Actress in a Comedy Series for  playing a bumbling vice president on “Veep.”

“I’m very grateful for having the opportunity to make people laugh,” Dreyfus said, as she picked up her Best Actress statuette. “It’s a joyful way to make a living.”

Louis-Dreyfus made her remarks while co-star Tony Hale, who had just won a Best Supporting Actor award for the show, hovered in the background, waiting for her to thank him.

On the male side of the ledger, Jim Parsons scored his third Emmy award for playing the ultimate geek in “The Big Bang Theory.” “I’m very aware of how exceedingly fortunate I am … it’s so silly to be so emotional, isn’t it?” Parsons said.

“You deserve half of this, so you want the bottom or the top?” Douglas asked his co-star Matt Damon, who was shown cracking up from his seat in the audience.

Fincher wasn’t the only big screen talent awarded for taking on the small screen. Steven Soderbergh earned a statue for directing “Behind the Candelabra,” a look at the life of Liberace.

“If Michael and Matt don’t show up with those performances, we don’t have a movie,” Soderbergh said, thanking hist stars. 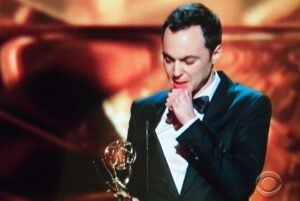 The actress thanked her immediate and professional families for their support, noting that her co-star and previous Emmy winner Cranston advised her to breathe.

Cannavale thanked his fellow nominees saving particular praise for “Homeland”s’ Mandy Patinkin, a man who had seemed to have a better chance of winning the prize.

Wever picked up a Best Supporting Actress in a Comedy statue for her role as a bubbly nurse on the Showtime series, while Hale earned his statue for playing an unctuous assistant on the HBO political satire.

Hale thanked his “Veep” collaborators and a Tallahassee, Fla., theater that helped him get into acting.

Wever kept it much briefer, saying simply, “Thank you so much, I gotta go, bye.”

In the TV Movie or Mini-Series race, Laura Linney won a Best Actress for her work as a dying cancer patient on “The Big C: Hereafter,” the final coda to her Showtime series. She was not in attendance and the honor had been expected to go to either “Top of the Lake”s’ Elisabeth Moss or Jessica Lange for “American Horror Story: Asylum.”

In other key behind-the-scenes categories “Modern Family” and “The Hour” won directing honors, while “The Colbert Report,” “30 Rock” and “Homeland” picked up an award for its writing.

Neil Patrick Harris kicked off his second stint hosting the glitzy gathering on a relatively low-key, somewhat meta moment that saw him watching clips of nominated shows like “Breaking Bad” and “30 Rock” and his own work as a Tony Awards show.  It also had a cameo appearance by CBS chief Les Moonves, playing a security guard. The response at the Nokia Theatre was muted.

The collaborations continued into the opening monologue with past hosts Conan O’Brien, Jimmy Kimmel, Jimmy Fallon and Jane Lynch taking the stage to advise Harris on emceeing.

“Now look at us a bunch of amateurs hoping to get a selfie with the guys from ‘Duck Dynasty,'” O’Brien joked noting the enormous changes that have taken place since he last hostedthe show  in 2006.

The biggest laughs came with a popcorn munching Tina Fey and Amy Poehler heckling Harris to take his pants off and twerk like Miley Cyrus.

The evening also had many somber moments, including tributes to several stars who died over the year, including “All in the Family”s’ Jean Stapleton, Jonathan Winters, “Family Ties” creator Gary David Goldberg, “Sopranos” star James Gandolfini and “Glee”s’ Cory Monteith.

Monteith died of a heroin overdose last summer and co-star Jane Lynch said that he was worthy of his fans love though she noted that his death was a reminder of “the rapacious destruction that is brought on by addiction.”

Monteith’s death at the age of 31 rocked the TV world, but it was Edie Falco’s tribute to her “Sopranos” husband Gandolfini that provided one of the most emotional moments in an evening filled with them.

While viewers may have missed Gandolfini’s volcanic performances, Falco said, “”I miss Jim the man.”