Sam Mendes is paying tribute to cinema in the teaser trailer for “The Empire of Light,” which dropped Wednesday.

Set in a seaside town in the 1980s, the teaser opens on a solitary figure seated in a movie theater, while the curtains pull back on a blank screen.

“Film: it’s just static frames with darkness in between,” says the projectionist (Toby Jones) as he loads a roll of film into a projector. “But there’s a little flutter in your optic nerve, so if I run the film at 24 frames per second, it creates an illusion of motion, an illusion of life, so you don’t see the darkness.” 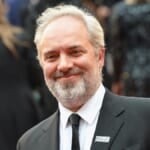 The moviegoer in question appears to be Hilary (Olivia Colman), who is shown staring out at the window at Empire Cinema between shots of her at a “Welcome Home” party and a carnival. It’s at the carnival where she appears to meet a striking young theater worker (played by “Top Boy”s Micheal Ward) with whom she strikes up a romance.

A tuxedoed Colin Firth flashes across the screen at one point, but most of the action is focused on the two romantic leads either commuting or soaking in the magic of the movie theater. The film also stars Tom Brooke, Tanya Moodie, Hannah Onslow and Crystal Clarke. 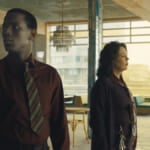 “Out there, they just see a beam of light,” Jones continues in voiceover as Trent Reznor and Atticus Ross’ score crescendoes. Roger Deakins, who won the Best Cinematography Oscar for his work on “1917,” captures a number of dazzling light sources, from the beam of the projector to a fireworks display.

“Empire of Light” marks Mendes’ first venture as a solo writer-director and his first feature since 2019’s “1917.” The filmmaker is set to receive the Ebert Director Award at next month’s Toronto International Film Festival, where “Empire” will make its Canadian premiere.

Check out the full teaser trailer above or here. 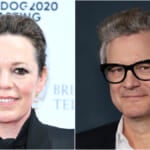