The second “Escape Room” film is projected by Sony to earn $7-8 million in its opening weekend, which would be a good start on a budget of $15 million.

For reference, the first “Escape Room” movie from 2019 ultimately grossed $155 million at the worldwide box office. It made $2.3 million in its Thursday preview start in 2019 and would go on to open to $18.2 million. 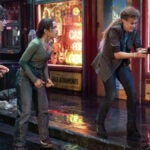 “Space Jam: A New Legacy” is also opening this weekend both in theaters and HBO Max, but did not open in Thursday night previews.

“Escape Room: Tournament of Champions” is directed by Adam Robitel and is the story of six people unwittingly trapped in a series of dangerous and deadly escape rooms. In order to survive, the individuals have to slowly uncover what it is they all have in common, discovering that they’ve all played this dangerous game before.

The “Escape Room” sequel currently has a 41% score on Rotten Tomatoes.